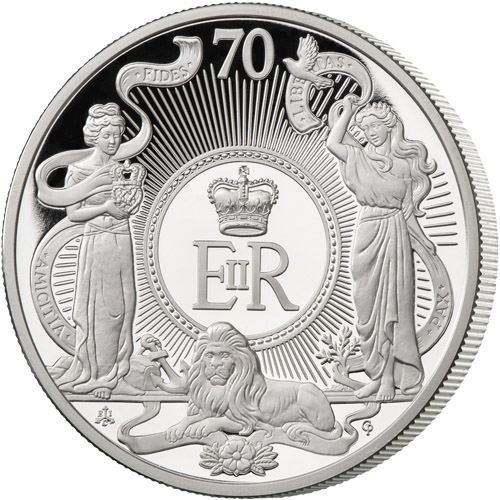 2022 marks a historic date in the already record-setting reign of Queen Elizabeth II of England. The ruling monarch of the United Kingdom since 1952, Queen Elizabeth II again becomes the first British monarch to hit a major milestone as she celebrates her Platinum Jubilee, an even marking her 70th year on the throne. Now, 2022 5 oz Proof Silver St. Helena Queen’s Platinum Jubilee Coins are available to you for purchase online at Silver.com.

Her reign has not only been a record-setting run for a British monarch, but has also been one that has seen various eras of turmoil and war, as well as prosperity and peace. The UK was a prominent player in the Cold War between the US and Soviet Union, engaged in the Falklands War, and went through a long decolonization process in Africa as its former colonies gained independence. At home, she has provided a steady presence as the United Kingdom granted greater powers to national assemblies in Scotland and Northern Ireland, as well as the recent Brexit process.

The obverse of the 2022 5 oz Proof Silver St. Helena Queen’s Platinum Jubilee Coins comes with a portrait of Queen Elizabeth II. Her Majesty is shown here in right-profile relief wearing the George IV State Diadem Crown. This portrait was created in 2015 by Jody Clark and is the fifth-generation effigy of Her Majesty to feature on most Commonwealth coins.

On the reverse of 2022 Proof Silver Queen’s Platinum Jubilee Coins, you will find the elegant depictions of two female allegories. Here, the allegory on the left reflects friendship and loyalty, while the allegory on the right represents freedom and peace.

These 2022 5 oz Proof Silver St. Helena Queen’s Platinum Jubilee Coins are available to purchase with individual, custom display boxes. Each coin has its own box and a Certificate of Authenticity from the mint. Proof coins offer frosted design elements and mirrored fields to create visual contrast between the design and the field of the coin.