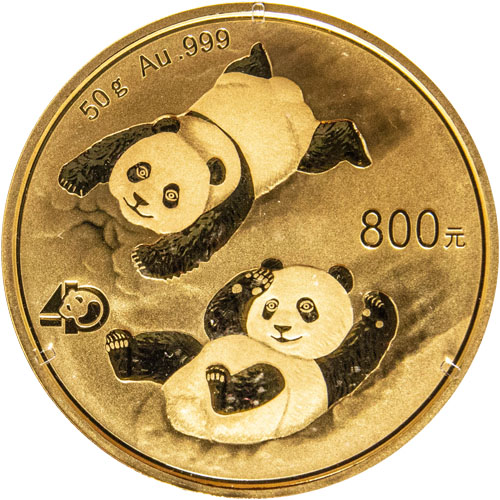 When the Chinese Mint introduced the Gold Pandas in 1982, the series had four BU coins available to investors with Troy ounces used for the weights. The series started with 1 oz, 1/2 oz, 1/4 oz, and 1/10 oz gold coins in 1982, adding a 1/20 oz gold coin in 1983. That same year saw the start of the Silver Panda Series, though the latter was a proof-only collection until 1989 when the first BU Silver Pandas were released.

In 2016, all of the coins in the collection transitioned to Grams for the weights. Now in 2022, the Chinese Mint offers its stable of beautiful gold and silver coins with a 40th-anniversary privy mark on the coins, and also issued its first-ever platinum coins to celebrate this landmark date in the series.

On the reverse side of the 2022 50 Gram Proof Gold Panda is a depiction of two Giant Pandas. The unique species of bear is rare in the wild and native to the central highlands of China. In this design, the bears are enjoying a playful outing in the snow. The duo slides down a snow-covered hill in the design element. This side includes the 40th-anniversary privy mark.

These 2022 50 Gram Proof Gold Chinese Pandas are available to you with protective capsules inside a wooden presentation box. The coins come with a Certificate of Authenticity and boast proof visuals. This means the coins have frosted designs and mirrored fields.