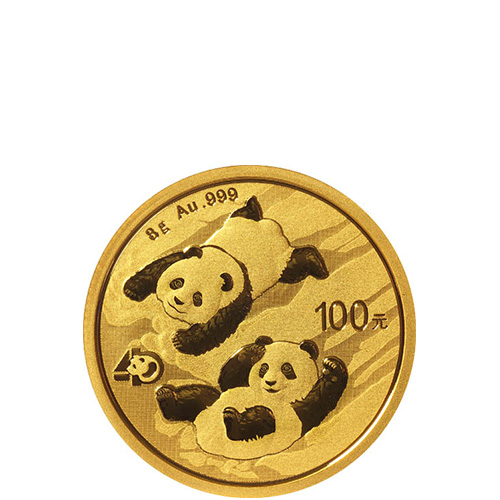 Any quantity available for $92.99 per coin over spot!

In 1982, the Gold Pandas debuted at the Chinese Mint as the first version of the Chinese Panda bullion series. The gold coins were the only options available in 1982 and four weights were offered to investors. The series has grown modestly with time, adding an additional gold weight in 1983 and a proof silver coin that would eventually evolve into the BU Silver Panda Series in 1989. Today, 2022 8 Gram Gold Chinese Pandas are available to you online at Silver.com.

Gold Panda coins set a standard with their release that other coin programs around the world have mimicked in the decades since. The Gold Panda has a static design on the obverse each year that has never changed with the passage of time. However, the reverse visual of the Giant Panda species has changed each year, with only the 2002 design offering a repeat design. Other programs like the Somalia Elephant, Australian Kangaroo, and Australian Kookaburra have used this same design approach in the time since the Gold Panda debuted.

All of these 2022 8 Gram Gold Chinese Pandas come to you in Brilliant Uncirculated condition from the mint. The gold coins in the 8 gram weight in this series are available to you in sealed, protective plastic pouches.

The reverse side of 2022 8 Gram Gold Chinese Pandas features an image of two Giant Pandas. The bears are shown sliding down a snowy hill, with one sliding head-first on its stomach and the other feet-first on its back. This side of the coin features the 40th-anniversary privy mark.

Please contact Silver.com with any questions about these gold coins for sale. You can call us at 888-989-7223, chat with us live online, or email us directly.