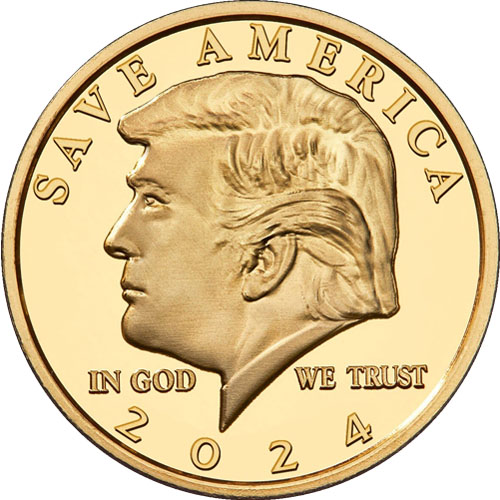 Love him or hate him, President Donald J. Trump generated more conversation in America than any president in recent memory. Many of his policies and statements proved to be lightning rods for criticism and continued conversation. He swept on to the political scene in 2015 when he announced his intention to run for the GOP nomination. He emerged from a large field of GOP contenders to win the nomination and shock Hillary Clinton in the 2016 US Presidential Election. Though he lost his reelection bid, there’s always the chance he’ll run again in 2024. Now, 2024 Golden Donald Trump Save America Tribute Coins are available to you for purchase online from Silver.com.

Donald Trump shook the political landscape in America with his victory in the 2016 US General Election. Leading up to election night, few pundits gave Trump a fighting chance to defeat Hillary Clinton. By the next morning, Donald Trump had secured his place in history as the 45th President of the United States, defeating Hillary Clinton by a count of 304 electoral votes to 227.

However, President Trump’s victory put him in a unique position. He was the fifth candidate in U.S. history to win office while losing the popular vote. When he ran for reelection, the Electoral College vote swung the other way against him as he lost by a count of 306 votes for Joe Biden to 232 for himself. If President Trump runs again in 2024, he has a chance to join Grover Cleveland as the only U.S. President to serve two non-consecutive terms.

On the reverse side of 2024 Golden Donald Trump Save America Tribute Coins is a depiction of the presidential seal. A more elegant version of the heraldic eagle, this design includes a front-facing eagle with the US national shield on its chest, the arrows of war in one talon, and the olive branch of peace in the other.

These 2024 Golden Donald Trump Save America Tribute Coins are available to you with individual acrylic capsules. Each one has a thin layer of 24-karat gold applied for visual appeal and comes with proof-like visuals that include frosted designs on mirror-like fields.