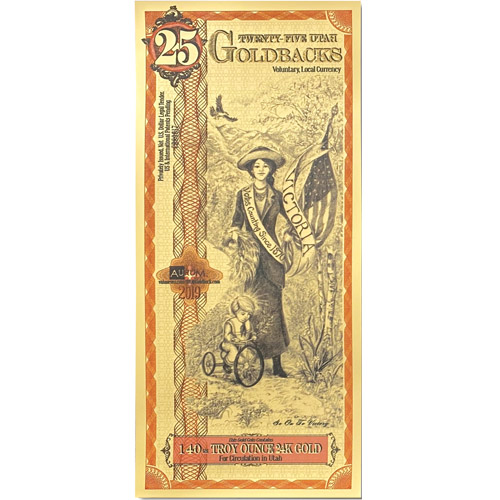 Gold was once readily exchanged by Americans in the course of everyday commercial transactions. From 1792 to 1933, gold coins were produced in the US with denominations of $1, $2.50, $5, $10, and $20. With the disappearance of gold coins from circulation after the gold standard was halted, Americans had no easy-to-exchange form of gold for bartering or commercial transactions. The Utah Legal Tender Act of 2011 is one small step in changing that reality. Now, 25 Utah Goldback Gold Notes are available to you for purchase online at Silver.com.

The Utah Legal Tender Act of 2011 sought to recognize certain types of gold as acceptable currency within the state. The result was the Utah Goldback series of gold notes as privately-issued barter notes that can be accepted as legal tender in Utah. Since the end of the gold standard, Americans have lacked an option to hold gold in a spendable format suitable for smaller transactions.

Gold bullion bars and coins have value, but with a 1 oz gold valued around $1,500 (USD), it is hard to imagine anyone ever using such coins to buy groceries each week or easily fill the car with gas. With the release of Utah Goldback Gold Notes, it is conceivable that Utahans could find local businesses willing to accept physical gold notes as a legal form of currency.

Victoria is depicted in the obverse design of 25 Utah Goldback Gold Notes in this product listing. Each one of the notes has an image of Victoria standing with a wheat stalk in one hand, symbolizing victory, and an American flag on a short pole in the other hand. The banner across her chest reads “Votes Counting Since 1870.”

The design of Victoria as a suffragette on the 25 Utah Goldback Gold Notes points to the role Utah had in pioneering the right for women to vote in the United States. In 1870, before it was a state in the Union, Utah granted women the right to vote. The only US state to beat Utah to the punch in this respect was Wyoming.

Your 25 Utah Goldback Gold Notes ship individually packaged inside of sleeves for protection. These 1/40 oz gold notes are much smaller than the vast majority of other gold bullion products available and feature no specific design on the reverse. You can, however, see the mirror image of the design from the obverse resulting from the production process.

Silver.com customer service is available at 888-989-7223. We can also field your questions online using our live chat and email address features.