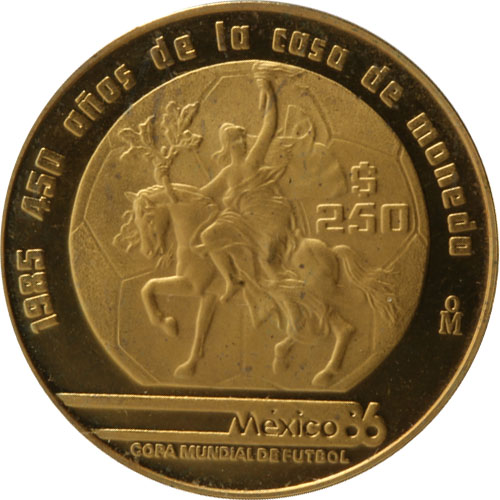 The Peso is the official currency of Mexico and coins were first issued with this legend during the Second Mexican Empire by Emperor Maximillian. Today, the Peso is known around the world and various denominations have been issued over time, but the 250 Peso denomination is among the least common. Today, 250 Peso Gold Mexican Coins are available to you online at Silver.com in varied condition.

In 1985 and 1986, the Mexican Mint issued 250 Peso Gold Coins to mark two important occasions for the nation. The 1985 release of 250 Peso coins with gold content included a reverse design that celebrated the upcoming 1986 FIFA World Cup that Mexico would host and marked the 450th anniversary of the founding of the Mexican Mint in 1535. The 1986 issue of the coins celebrated the World Cup’s arrival.

All 250 Peso Gold Mexican Coins in this listing come to you with a protective plastic flip. The coins in this Silver.com listing are available to you from random years with varied conditions. We cannot hand-pick your coins for certain date marks, designs, or conditions. If you purchase more than one gold coin in this listing, we are unable to hand-select your products to ensure you receive different date marks, conditions, and designs.

On the obverse of all 250 Peso Gold Mexican Coins is a design of the coat of arms for Mexico. This seal includes a powerful Mexican eagle perched on a cactus branch as it battles with a serpent. The design was adopted following the nation’s independence from Spain, with the eagle representing Mexico and the serpent representing Spain.

The reverse designs vary depending on the date mark of the coin. 1985 250 Peso Gold Mexican Coins celebrate both the coming World Cup and the Mexican Mint’s 450th Anniversary with a design that includes a woman on horseback superimposed over a soccer ball in the background. Inscriptions on this face mark both celebrations, with “Mexico ‘86” below and the mint’s anniversary above.

On the reverse of the 1986 250 Peso Gold Mexican Coins is a soccer ball set in front of a wall of Ancient Aztec artistic renditions. Inscriptions on this side include the logo for the 1986 World Cup in Mexico and the Spanish-language engraving for the World Cup.

Please feel free to reach out to Silver.com if you have any questions. You can call our customer service team on the phone at 888-989-7223, chat with us live online, or simply send us an email with your inquiries.