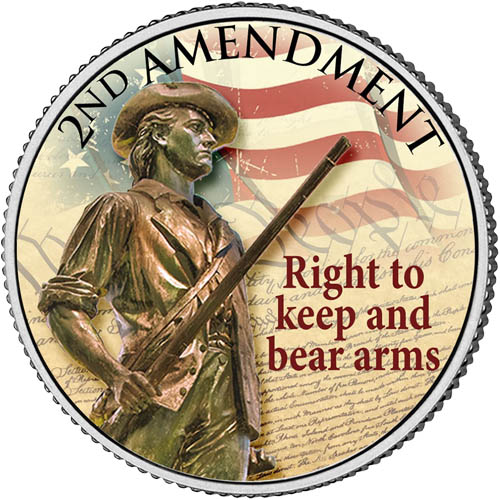 In 1964, the United States Mint introduced the JFK Half Dollar for use in circulation. The JFK Half Dollar is the second-largest denomination among American coins and is more popular than the several attempts at US dollar coins. The larger blank makes the 50-cent piece a popular coin among private mints creating commemorative coin designs. Right now, 2nd Amendment Right to Bear Arms JFK Half Dollars are available to purchase online at Silver.com.

Each 2nd Amendment Right to Bear Arms JFK Half Dollar is available to you here at Silver.com with a plastic capsule for delivery. The coin and capsule come with a small display stand for the upright presentation of your coin. You will also receive a Certificate of Authenticity with this coin.

US Half Dollar coins have been in production at the US Mint since the 19th century. The JFK Half Dollar design was introduced in 1964, just months after President John F. Kennedy was assassinated in November 1963. There was a groundswell of interest in putting President Kennedy on one of the main forms of American currency. Among the Penny, Nickel, Dime, Quarter, and Half Dollar denominations from the US Mint, the Half Dollar is the newest design with its 1964 release.

The obverse side of 2nd Amendment JFK Half Dollars comes with a depiction of a colonial figure with a musket in hand. The figure is standing in the middle of the colorized design field with a musket in his hand, ready to defend his home. The 2nd Amendment in the Bill of Rights protects the ability of Americans to keep and bear arms to defend their homes and their land from any oppressor.

On the reverse field of the 2nd Amendment Right to Bear Arms JFK Half Dollars is an image of the modified presidential seal. This design was created in 1964 for the JFK Half Dollar and shows the bald eagle in front-facing relief with a US national shield on its chest, the arrows of war in one talon, and the olive branch of peace in the other.