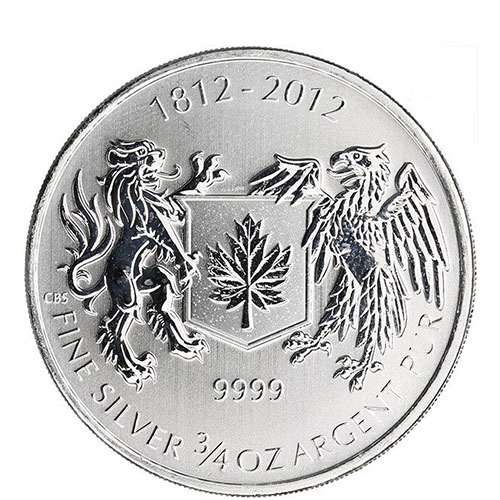 The War of 1812 has a misleading name, as it was fought from late 1811 to the first days of 1815. During the war, America’s capital was burned, American troops handed British forces important defeats, and little changed on the North American continent. To mark 200 years since its start, the Royal Canadian Mint issued commemorative coins. Right now, ¾ oz Silver War of 1812 Coins are available to purchase online at Silver.com.

The designs of the ¾ oz Silver War of 1812 Coins come from a well-known Canadian artist, and one that many are likely not familiar with. The obverse design comes from Susanna Blunt. Her effigy of Queen Elizabeth II is just the second-ever from a Canadian artist, and it replaced the imagery of the Queen created in 1990 by Dora de Pedery-Hunt, the first-ever Canadian artist to develop a monarch’s portrait.

For the reverse design, Cathy Bursey-Sabourin designed imagery meant to represent the combatants involved in the War of 1812. In this case, symbols reflect the American and British soldiers that fought as main combatants, and the Native Americans and French-Canadians who fought on the side of the British.

The reverse of the ¾ oz Silver War of 1812 Coins include the design from Bursey-Sabourin. In this image, a heraldic shield in the center includes a single maple leaf reflecting the French-Canadians and Native Americans fighting the British cause. The English Lion to the left and American Eagle to the right represent the main combatants of the war.

On the obverse of the Silver War of 1812 Coin is the effigy of Queen Elizabeth II. Her Majesty is featured here in right-profile relief with engravings of her name “Elizabeth II” and “Canada Dollar” included on this face of the coin.

If you have any questions for Silver.com when buying silver online, don’t hesitate to ask. Our customer service team is available to you at 888-989-7223, on the web using our live chat, and via our email address.