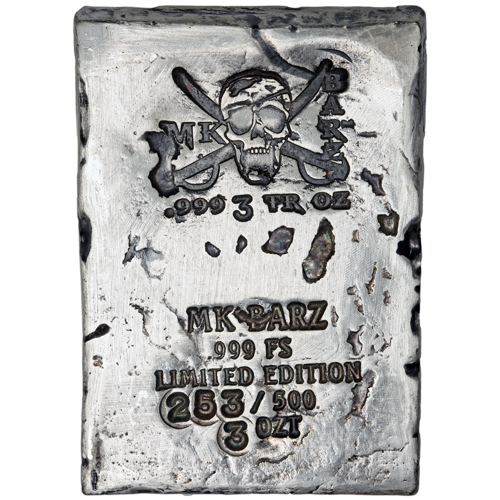 MK Barz is one of the newest refineries in the United States, and this private company is making waves with silver bars and rounds featuring pirate-themed designs and traditional production methods. The Golden Age of piracy may be dead, but that doesn’t mean its images have to be. Right now, the 3 oz MK Barz Silver Pirate Wafer Bar is available from Silver.com.

When most people think of pirates, they envision the Pirates of the Caribbean. These buccaneers were neither the first nor the last pirates to plague the world, but they were among the most successful and fearsome.

Blackbeard, born Edward Teach, is among the most famous pirates ever to roam the Caribbean. He captured a French slave ship in 1717 that he renamed Queen Anne’s Revenge and outfitted with 40 guns. The master pirate, once a British Royal Navy sailor, terrified his targets by coiling lit fuses into his long, black beard.

Other notable pirates of Caribbean lore include Calico Jack, a man who received a pardon for his piracy in 1719 only to head back out to see on a captured sloop from Nassau in the Bahamas to ply his trade once more. He had two of history’s first female pirates on board. Anne Bonny left her husband to live the pirate life with Calico Jack, and Mary Read had been with him for some time dressed as a man.

The exploits of these pirates and others are captured in the simplistic beauty of the 3 oz MK Barz Silver Pirate Wafer Bar. Featuring the design of a skull and crossed swords, with bandana on the head of the skull, it is reminiscent of early pirate flag designs.

On the reverse of each bar is the MK Barz mint name, along with engravings of the weight, metal content, and purity of the product. Each 3 oz MK Barz Silver Pirate Wafer Bar is hand-poured and hand-stamped, ensuring that no two are exactly alike.

MK Barz was founded in 2014 in Los Angeles, California. It is a private, family-owned and operated facility whose primary owner has more than 35 years of experience collecting and grading US coinage.