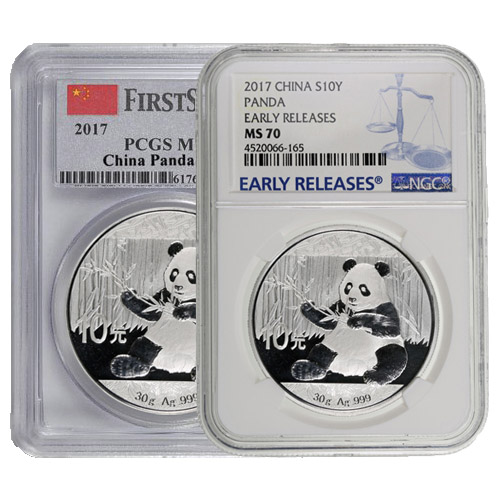 It wasn’t until 1989 that the Chinese Mint had standardized its Silver Pandas for annual release. The coin settled in at 1 Troy oz of .999 fine silver with a 40 MM diameter. It continued that way until 2015. In 2016, the Chinese Mint switched all of its Chinese Panda bullion coins from Troy ounces to Grams.

The obverse face of 30 Gram Silver Chinese Pandas always features the Giant Panda species, but the massive bears are depicted in a new design for each release. The coins sometimes feature just one bear or can feature an adult and its young cub. The designs in the 30 Gram version of the series have never been repeated, so you’ll find new images for each date mark since 2016.

On the reverse side of 30 Gram Silver Pandas is the Hall of Prayer for Abundant Harvests. The exterior facade of the building is depicted on this side of the coins every year dating back to the debut of the series. The date mark is featured on this side along with the nation of issue.

These 30 Gram Silver Chinese Pandas are available to you in Mint State 70 condition. Coins in this condition showcase full, original mint luster and no detracting flaws of any kind. This grade has been assigned by either the PCGS or NGC. We cannot guarantee which grading house certified the coin you receive. It is possible you will receive coins with additional labels as well, such as First Strike or Early Release.

All coins in this listing are chosen at random with random years available. This means we do not guarantee the date mark and associated design on the coin you receive. If you buy multiple coins, please be aware you might receive several with the same date mark and design.