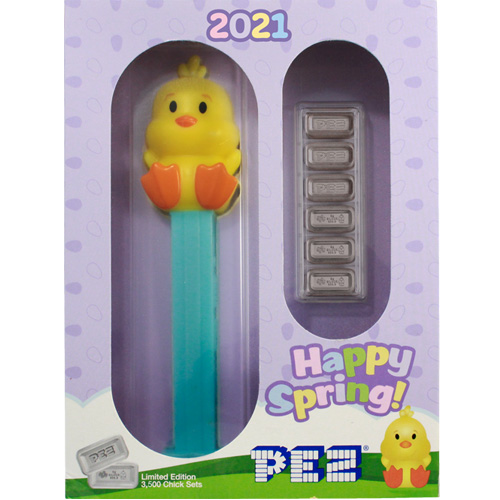 Originally created in Austria in 1927 with the intention of aiding in smoking cessation, PEZ wafers went on to become one of the most popular hard, sugar candies in the world. While the candy itself is popular with sugar lovers, the creative PEZ dispensers that have been created in the decades since have arguably become the more popular item associated with the candy. PAMP Suisse has showcased innovation in design and packaging to offer silver PEZ wafers with accompanying PEZ dispensers that actually work to safely house the silver bullion items. The latest release is here just in time for Easter 2021. Now, 30 Gram Silver PAMP Suisse Chick PEZ Wafers and Dispensers are available to you for purchase online at Silver.com.

PEZ candies were originally developed as round peppermint lozenges in 1927 by Eduard Haas. Oddly enough, the first PEZ dispensers created at the time were similar to the appearance of a cigarette lighter and marketed to adults as a breath mint that served as an alternative to tobacco use, or at the very least a tool to assist in smoking cessation.

After World War II slowed business, Haas brought the product to the United States for the first time in 1952. Three years later, PEZ began manufacturing dispensers with small character heads atop the dispenser. Some of the first characters to feature were Santa Claus, Popeye, Mickey Mouse, and Donald Duck. The first PEZ factory built in the United States was completed in Orange, Connecticut in 1973. To this day, PEZ dispensers remain a popular collector item with an appeal to fans of the candy and those who love knickknacks.

The obverse side of 30 Gram Silver PAMP Suisse Chick PEZ Wafers features the image of the PAMP Suisse logo. Arranged horizontally across the face of the silver wafer, the PAMP logo is on the left, with the weight, purity, and metal content in the center and a lovable little chick on the right.

On the reverse of 30 Gram Silver Chick PEZ Wafers, you will find the PEZ logo. The company logo is famously made by using small PEZ wafers to spell out the three-letter initials of the company. PEZ is the shortened version of the full name of the candy, Pfefferminz, the German word for peppermint, the original flavor of the candies.

These 30 Gram Silver PAMP Suisse Chick PEZ Wafers and Dispensers ship with a custom capsule housing the six individual 5 Gram silver PEZ wafers. Each wafer has a reverse-proof visual element with mirrored images over frosted fields. The capsule of wafers and the PEZ Dispenser are housed together inside of an Easter-themed presentation box.