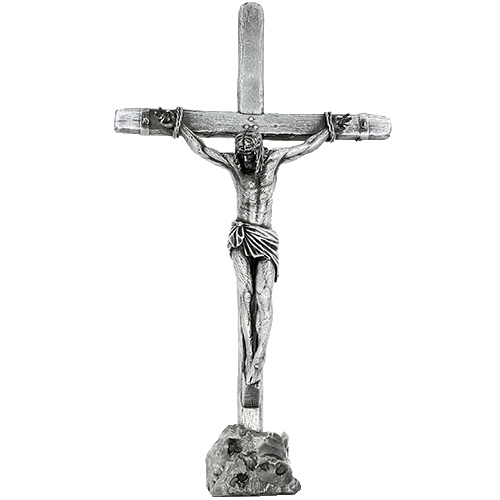 One of the most difficult images for many Christians to deal with is the image of the savior, Jesus Christ, slowly dying on the cross. Captured by and persecuted by the Roman Empire, Jesus was sentenced to die upon the cross. There was purpose in his death though as Christians the world over believe his life saved the immortal souls of others. Now, 30 oz Antique Finish Silver Silversmith Judges Series The Passion Statues are available to you for purchase online at Silver.com.

The Passion is the term used in Christianity to refer to the sacrifice of Jesus Christ. While it may seem as though Christ merely died at the hands of the Romans in a brutal manner for defying local authorities, his death had a higher purpose. Christians believe that the very death of Jesus Christ was meant to cleanse the world of its sins.

In dying upon that cross, Jesus Christ took upon his shoulders the sins of all mankind. With his death, Jesus granted new life to the people of the world by bearing their sins as his own. For that, he would pay a terrible price. Following his prosecution, Jesus was beaten, made to carry his own cross through the city streets, stuck with a crown of thorns, and eventually nailed to a cross.

30 oz Antique Finish Silver Silversmith Judges Series The Passion Statues depict the period of Christ’s final moments on this Earth. As he was left to hang on the cross, the Romans stabbed his side with a spear to ensure he was dead before taking him down. While most believe that exposure and dehydration resulted in his death, subsequent studies of the crucifixion process have shown that suffocation was likely the ultimate method of death.

In the design of these 30 oz Antique Finish Silver Silversmith Judges Series The Passion Statues, the body of Jesus is shown hanging from the cross. A humble loincloth hangs around his midsection. He has a crown of thorns on his head and his hands and feet are nailed to the cross. The sign nailed at the top of the cross identifies him as “Jesus of Nazareth, King of the Jews.”

These 30 oz Antique Finish Silver Silversmith Judges Series The Passion Statues are packaged with protective wrapping around the statue inside of a shipping box. Each one of the statues comes with a Certificate of Authenticity from Hotco. The unique serial number, weight, and purity are laser-etched on the base.

Silver.com customer service is available to assist you at 888-989-7223 with questions when buying silver. You can also chat with us live online or email us directly with your inquiries.