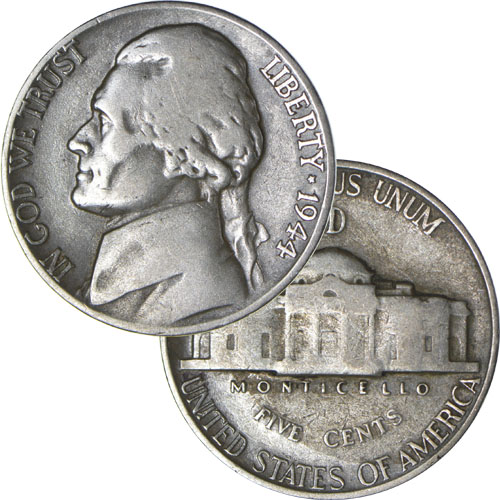 The United States war effort during World War II resulted in various important commodities being blocked from use by average Americans. All possible efforts were taken to divert necessary commodities to the production of armament, planes, guns, bullets, and bombs. Among the important commodities the government stockpiled for the war effort was nickel. The 35% Silver War Nickel is currently available to you for purchase online at Silver.com.

What exactly is a Silver War Nickel? Well, as mentioned above, the United States mandated the stockpiling of nickel in the country to redirect toward the production of armament for tanks and planes. As such, the United States Mint was ordered to remove all nickel from the production of the US five-cent piece. Beginning in late 1942, the US Mint shifted its nickels to a composition of 56% copper, 35% silver, and 9% manganese.

On the obverse of 35% Silver War Nickels, you’ll find Felix Schlag’s left-profile portrait of Thomas Jefferson. The third President of the United States, Jefferson’s bust has featured on the US nickel since 1938, with Schlag’s design running until 2004.

The reverse of 35% Silver War Nickels includes a design of Jefferson’s home at Monticello. The mint mark is included on this side and Schlag also created this artwork for the nickel in 1938. This design continues in use today.

These 35% Silver War Nickels are available to you with a total face value of $1 (USD) through this Silver.com listing. The coins are packaged together with a total of 20 individual coins.

We encourage Silver.com customers to contact us with questions about buying silver at 888-989-7223. You can also connect with us online through our live web chat or email address features.