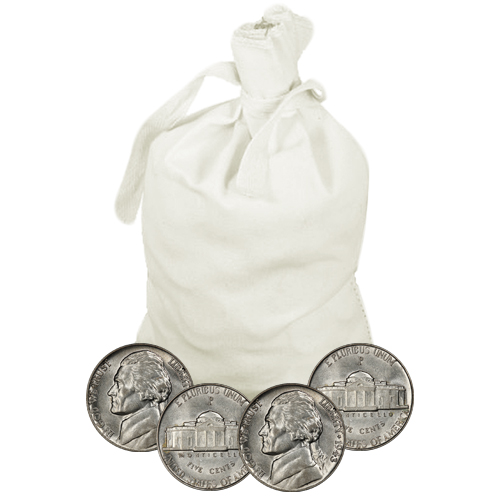 The US nickel has been in production in its current form since 1866, but had previously been issued as the US half disme, an old-world spelling for “dime.” It wasn’t until the 1866 Shield Nickel debuted that the US Mint produced a five-cent piece that modern Americans would recognize. Today, 35% Silver War Nickels are available to you online at Silver.com in a $200 Face Value batch.

The US nickel has been available since 1866 and been through two major eras in its history. From 1866 to 1938, the coin went through three design elements, the most popular of which was the Buffalo Nickel. Since 1938, the US nickel has featured the same design concept on its obverse and reverse fields. The first three designs were used for a combined 72 years, while the modern Jefferson Nickel has been in production for more than 80 years now.

All of the 35% Silver War Nickels in this product listing have a metallic composition of 56% copper, 35% silver, and 9% manganese. These are the only nickels in American history to boast silver content. All previous nickels featured 75% copper and 25% nickel. This listing offers a total of more than 225.04 Troy ounces of silver in the form of 4,000 US nickels totaling $200 (USD) in total face value. These US nickels are circulated specimens with common signs of wear and tear.

The United States Mint was told to assist in the US effort in World War II by removing nickel from its five-cent pieces. The US Mint originally considered a 50-50 copper-silver coin, but eventually settled on the composition mentioned above. These coins, known as Silver War Nickels, were issued from mid-1942 until 1945 when the war ended.

On the obverse side of 35% Silver War Nickels is a depiction of President Thomas Jefferson. The nation’s third president is featured on the obverse in left-profile relief. President Jefferson was a leading Founding Father and the man responsible for the Louisiana Purchase that vastly expanded American lands west of the Mississippi River.

Please feel free to contact Silver.com with your questions. We are available to you on the phone at 888-989-7223, online via our live chat, and through our email address.