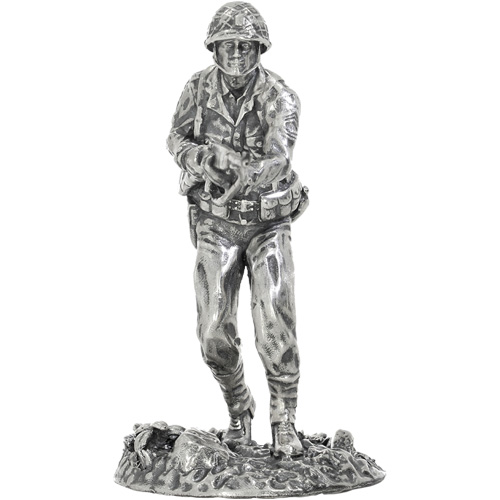 All 4 oz Silver Antique Silver Soldiers Collection Glover S. Johns Statues depict a World War II-era rifleman in the United States Army. The history of riflemen dates back much further than 75 years ago. In fact, the roots of regiments of riflemen date back to the 16th-century introduction of hand cannoneers and the 17th-century introduction of musketeers.

Riflemen didn’t exist in their current concept until the 18th and 19th centuries when rifled long guns were developed. The United States Army first introduced riflemen in 1808 with its singular regiment growing to three regiments during the War of 1812 against Great Britain. Disbanded following the war, those regiments were reformed during the Mexican-American War and became permanent fixtures in infantry units during the Civil War.

These 4 oz Silver Antique Silver Soldiers Collection Glover S. Johns Statues are inspired in form and name by Col. Glover S. Johns, a decorated US rifleman who served in the US Army during World War II. This figure is as brave and fearless as his namesake, Glover S. Johns. With his trusted M1 Garand rifle in hand, Glover S. Johns charges forward to meet the enemy head-on with a steely gaze.

Col. Glover S. Johns is one of the most decorated US service members from World War II. During the Battle of St. Lo, he earned three Silver Stars and three Legion of Merit awards for his bravery.

4 oz Silver Antique Silver Soldiers Collection Glover S. Johns Statues are available to you with a protective shipping box and an included Certificate of Authenticity. The numbered COA matches the laser-etched serial number found on the base of the statue.

We encourage Silver.com customers to reach out to us with questions when buying silver. You can call us on the phone at 888-989-7223, chat with us live online, or simply send us an email with your inquiries.