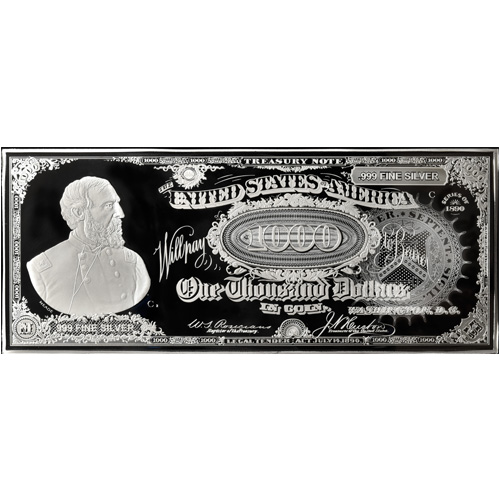 Historic US notes featured some of the best currency designs in American history. Aside from the designs of the early 20th century on American gold and silver coins, historic notes such as the United States Note, Silver Certificate, Gold Certificate, and Treasury Notes featured images that modern artistic currency collectors still seek. Today, 4 oz Silver 1890 $1000 Treasury Grand Watermelon Note Replica Plate Bars are available to you online at Silver.com.

The Treasury Note design represented here was part of a series of representative paper currency released by the US Treasury during the 1890s. The notes were redeemable from 1890 to 1893 with two design series rollouts. The first came in 1890 with denominations of $1, $2, $5, $10, $20, $100, and $1000. The second came in 1891 and boasted all of those same denominations, with the addition of a $50 note. A $500 note was designed for the series but never released. The $1000 Treasury Note was the largest of the collection and had what became the most memorable design.

All of the 4 oz Silver 1890 $1000 Treasury Grand Watermelon Note Replica Plate Bars available through this product listing are brand new from the mint and come with protective packaging for shipping. The silver bars will arrive in individual capsules for shipping and capture every detail as first printed on the 1890 $1000 Treasury Note.

On the obverse side of the Silver 1890 $1000 Treasury Grand Watermelon Note Replica Plate Bar, you will find inscriptions of the issuing nation, the denomination, and the redeemable form of the Treasury Notes. More on that in a moment. Additionally, you will find an effigy of United States Army General George Meade.

The reverse face of 4 oz Silver $1000 Treasury Grand Watermelon Note Replica Plate Bars comes with the original design of the denomination. While there are various inscriptions on this face that replicate the detailed imagery of the original issue, the most important are the numbers. The zeros used to denote “1000” as the denomination were large and green in the first release, giving rise to the popular use of the term “watermelon” to refer to the zeros on the note and the note’s design as a whole.

Please contact Silver.com if you have any questions. Our customer service team is available to assist you with any questions at 888-989-7223, using our live chat, or via our email address.