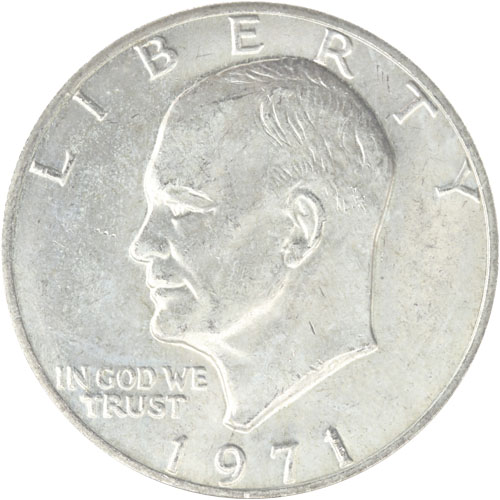 There have only been two 40% silver coins ever issued by the United States Mint. The first was the Kennedy Half Dollar, which was available with 90% silver in 1964 and 40% silver from 1965 to 1970 before switching the modern cupro-nickel alloy. The other coin was the Eisenhower Dollar, the last US silver dollar issued by the US Mint. Today, 40% Silver Eisenhower Dollars in circulated condition are available to you online at Silver.com.

The United States Mint reintroduced the US silver dollar coin in 1971 after a 36-year absence. Prior to the debut of the Eisenhower Dollar, the US Mint last issued a silver dollar in 1935 with the final striking of the Peace Dollar design. With images from Frank Gasparro on the obverse and reverse, the Eisenhower Dollar was available from 1971 to 1978 with a cupro-nickel circulation coin and a silver-clad option with 40% silver content from 1971 to 1976 only.

All of the 40% Silver Eisenhower Dollars in this product listing come to you in circulated condition. Coins in circulated condition can show varying levels of wear and tear. Most circulated coins have typical detracting flaws such as scuffs, blemishes, scratches, or other light detractions. Each one of the coins available to you in this listing comes with a protective plastic flip. Please keep in mind that the 40% Silver Eisenhowers were not issued for circulation use. The coins were struck in BU and Proof versions from 1971 to 1974 with the bald eagle design, and from 1975 to 1976 with the Bicentennial design.

President Dwight D. Eisenhower is depicted on the obverse side of 40% Silver Eisenhower Dollars. The left-profile bust of President Eisenhower featured on this side of the coin was created by Frank Gasparro in 1971. Gasparro was the 10th Chief Engraver of the United States Mint and held the position until 1981. He had previously worked on the reverse field of the Kennedy Half Dollar.

A stylized image of the American eagle landing on the moon is shown on the reverse side of the 40% Silver Eisenhower Dollar. Gasparro also created this image as a twist on the Apollo 11 mission patch worn by the astronauts who were the first to land on the moon. Coins issued in this series in 1975 and 1976 had a different design with the Liberty Bell in front of the moon. The design was used in honor of the nation’s 200th birthday.

Please feel free to reach out to Silver.com with any questions. Our team is available to contact on the phone at 888-989-7223, online through our live chat, and via our email address.