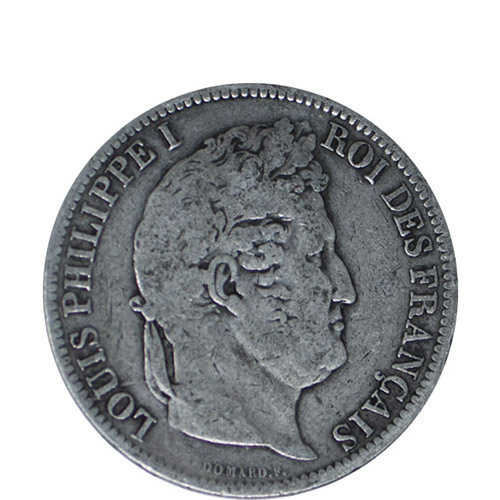 The Franc was once among the most circulated currencies on the European continent. Introduced by France in the 1790s, the Franc currency was used in two different waves through the late 18th, 19th, and 20th centuries. Francs were issued in gold, silver, copper, bronze, and modern cupro-nickel alloys over more than 160 years of coining by the Paris Mint in France. Now, 5 Francs Silver France Coins are available to you for purchase online at Silver.com.

Starting in 1801 and expanding throughout the remainder of the 19th century, the Paris Mint began to strike francs in silver and gold denominations. Silver denominations emerged starting in 1801 with the 5 Franc. These coins were struck by France through the Consulship period, the rise of the Napoleonic Empire, the Second Republic, the Second Empire under Napoleon III, and the Third Republic. The last of the original 5 Francs Silver coins were issued in the 1880s. In the 1960s, the modern French Republic issued 5 Francs Silver coins in the New Franc currency, but only did so through 1969.

In the obverse design element, 5 Francs Silver France Coins feature varying images of French leaders. During the Napoleonic Empire, France issued the coins with effigies of Napoleon Bonaparte. When Louis Philippe I reigned as the final King of France from 1830 to 1848, he appeared in right-profile relief on the obverse. Napoleon III appeared on the coins throughout the Second Republic and Second Empire. The modern New Franc version from the 1960s had the female La Semeuse figure on the obverse.

Designs on the reverse of the 5 Francs Silver France Coins were largely the same over the course of the 160 years the coins were in production. The original Francs featured the date and denomination in the center with a laurel wreath surrounding. The New Francs had the denomination above a cluster of three springs (oak, olive, and acorn), with the date below.

Silver.com customer service is available to assist you at 888-989-7223. You can also reach out to us online through our live chat and email address features.