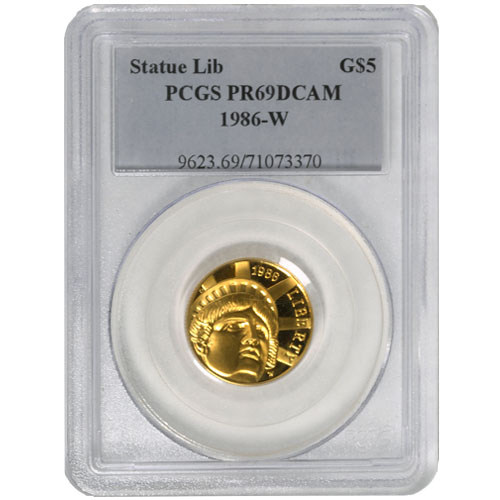 Modern commemorative silver and gold coins from the United States Mint returned in 1982 after a nearly-30-year hiatus in production. The very first commemoratives were produced by the mint in 1848, but by 1954 the lack of interest in such coins resulted in a suspension of coining. Today, you will find $5 Gold US Mint Commemorative Coins available to you online at Silver.com in near-perfect condition.

All of the $5 Gold US Commemorative Coins in this listing earned a PR69 certification from the NGC or PCGS. Coins in PR69 condition have full, original mint luster and a maximum of two minor detracting flaws. Acceptable flaws at this level include minuscule contact marks or hairlines and must be located outside of the primary focal points of the coin.

This Silver.com listing offers $5 Gold US Mint Commemorative Coins from random years. As such, you are likely to also receive random design as commemorative coins are produced for a short period and then the mint moves to another series focus. All of the coins in this listing are chosen at random, so we cannot hand-pick coins for certain designs, dates, or even NGC vs. PCGS labeling.

Obverse and reverse design elements vary greatly among $5 Gold US Commemorative Coins. One example of an obverse design from the $5 Gold US Mint Commemorative range includes a coin with the image of famed World War II and Korean War US Army General Douglas MacArthur on the obverse.

Please don’t hesitate to contact Silver.com with any questions. You can reach us on the phone at 888-989-7223, chat with us live online, or simply send us an email with your inquiries.