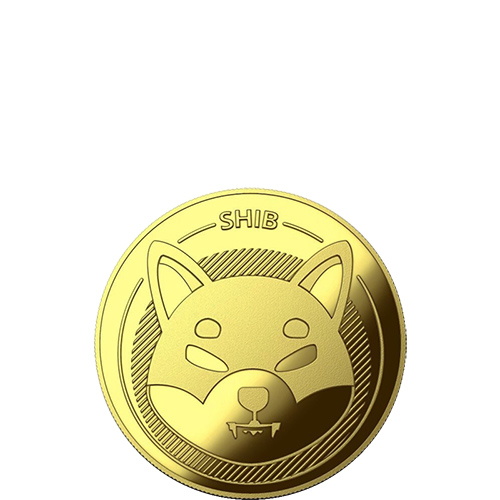 Any quantity available for $39.99 per round over spot!

Fans of cryptocurrency have a growing number of options available to help celebrate the growing prominence of these virtual forms of currency. Several forms of crypto currency have been developed in the last decade following the release of Bitcoin in 2011. One of the newest is Shiba Inu, the brand that promotes itself as the Dogecoin killer. Now, 5 Gram Gold Crypto Commemorative Shiba Inu Rounds are available to you for purchase online from Silver.com.

The first-ever cryptocurrency-themed silver round issued came in 2011 and bore a design honoring Bitcoin. While subsequent rounds have celebrated various other forms of cryptocurrencies, the reverse design has remained the same throughout. The MJB design has continued to feature on the reverse of all silver and gold rounds issued in this series.

Shiba Inu is a breed of hunting dog that originated in Japan. The dog gained global fame in 2013 when it was the focus of a meme known as the Doge meme. The meme sparked the satirical release of Dogecoin, a cryptocurrency inspired by the dog breed and the meme. In 2020, the new Shiba Inu cryptocurrency was released by anonymous developers to serve as a Dogecoin killer.

The obverse side of 5 Gram Gold Crypto Commemorative Shiba Inu Rounds features an image of the cartoonish Shiba Inu that serves as the logo of the currency. this logo offers a front-facing Shiba Inu head with a fierce scowl on its face.

On the reverse side of Gold Crypto Commemorative Shiba Inu Rounds is a common design element. This design element comes from the 2011 MJB release mentioned earlier and has a virtual-themed background with identifying hallmarks in the clean square on this field.

These 5 Gram Gold Crypto Commemorative Shiba Inu Rounds come inside plastic flips. The plastic flips include a Certificate of Authenticity card with a scannable QR code. You can also purchase multiples of 10 gold rounds in a plastic bag, with each round still individually sealed in its own card.

Silver.com customer service is available at 888-989-7223 to assist you in buying gold. Alternatively, you can chat with us live online or email us directly.