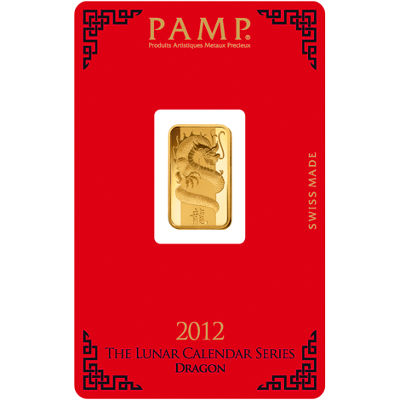 The 5 Gram Lunar Dragon Gold Bar was released in 2012 by PAMP Suisse of Switzerland. It was the first bar to be released from the mint’s highly popular Lunar Calendar Series and is considered a highly sought after piece among both investors and collectors. In keeping with the PAMP Suisse legacy of finely crafted bullion, this detailed bar has been minted from 5 grams of .9999 fine gold. It has been kept sealed in its official PAMP Suisse protective plastic assay case to ensure that its pristine condition remains intact.

Located on the front of the bar is the designated zodiac animal for 2012, the dragon, which is depicted wrapping itself around a tall marble pillar. From the fierce expression on its face to the scalloped fins pertruding from its body, customers are certain to appreciate the intricate details of this mythical creature. Artists have taken great care to ensure that this particular rendition is consistent with those seen in early Asian art. Also appearing on the front of the coin is the “long” or Chinese symbol for “dragon.”

The back of the bar creates the illusion of a three-dimensional image by depicting the reverse side of the front artwork. It features the previously obscured portions of the dragons body, such as its left claw and its tail. In addition to its artistic merit, the reverse serves as an engraved Assay by displaying all of the bar’s information including its mint, its weight, its purity and its serial number. Like a printed Assay, the mint’s official confirmation of authenticity appears at the bottom of the bar, beneath the dragon’s tail.

The 5 Gram PAMP Suisse Lunar Dragon Bar is a suitable gift for those born under the Year of the Dragon or for those simply looking for a unique gold bullion investment. Customers who would like to learn more about this bar are encouraged to call Silver.com at 888-989-7223. Additional support is available through our website’s live chat feature or by submitting the online form located on our contact page. To view similar merchandise check out our full offering of PAMP Suisse Gold Bars.