In ancient Roman mythology, the goddess Fortuna wore many different hats. She played a significant role not only in Roman mythology, but also in early Roman religions. Today, she is best known for her appearance on the in-demand PAMP Suisse Gold Fortuna bar. You now have the chance to purchase your own PAMP Suisse Gold Fortuna 5 Gram Bar, with Veriscan technology, from Silver.com.

Fortuna is most often associated with her role as the goddess of fortune. However, she was also viewed as the personification of luck, both bad and good, in Roman religion. As the daughter of Jupiter, king of the Gods, she was considered as bountiful as her father. The term “copia,” in Latin, was used to describe her in the light. Additionally, she held the title Annonaria, protector of grain supplies.

All of these associations are represented in the depiction of Fortuna used on the PAMP Suisse Gold Fortuna 5 Gram Bar. Depicted with a blindfold over her eyes, Fortuna is featured on the obverse side of the bar wearing a cornucopia on her head. The bountiful riches that flow from the horn of her cornucopia are captured by her clasped hands in the bottom of the engraving.

On the reverse side of the bar is the corporate logo of PAMP Suisse, as well as the identifying features of the bar itself. These include inscriptions of the bar’s weight, metal content, and purity. Below these engravings is the assayer’s mark and individual serial number that verify the identity and quality of the bar.

All PAMP Suisse Gold Fortuna bars are minted using .9999 fine gold. The Veriscan technology used to authenticate these bars starts with the minting process. The refinery scans each bar after it is minted, capturing the microscopic differences in its texture to create a unique fingerprint. That fingerprint is cataloged, allowing you to verify that authenticity of your purchase by scanning the QR code on the assay card.

PAMP Suisse, based in Ticino, Switzerland, is part of the larger MKS Group. MKS is headquartered in Geneva, Switzerland, but operates offices around the globe. If you have any questions, Silver.com associates are available to answer them. Simply call us at 888-989-7223, join us in our live chat, or send us an email. 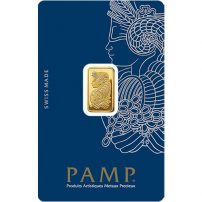 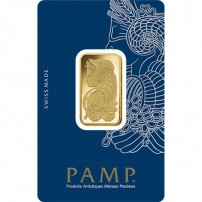