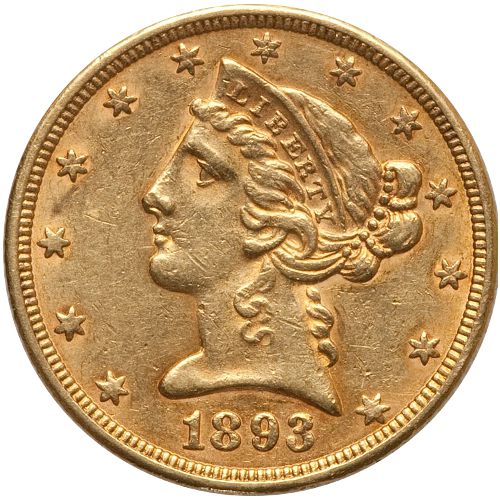 The oldest gold coin in American history is the Half Eagle. Gold Half Eagle coins were the very first gold coins authorized for production by Congress and struck at the United States Mint. The longest running coin series in the US, Gold Half Eagles were produced from 1795 to 1929. Right now, you have the chance to own the most popular coin in the series. The $5 Liberty Gold Half Eagle is now available from Silver.com.

Gold Half Eagle coins were authorized for production in 1792 when Congress passed the Act of April 2, 1792. The United States Mint produced the first gold coin in US history three years later. Half Eagles all bear a face value of $5, but have gone through a variety of design changes over the year. The Liberty design was the fifth creation in the coin series.

Liberty Half Eagle designs were introduced in 1839 and produced with only two minor changes through 1907. The original coins, struck through 1866, did not contain the motto “In God We Trust” on a banner above the heraldic eagle on the reverse. The face value engraving was changed at one point from “5 D” to “Five D.”

On the obverse side of each coin is the image of Lady Liberty, featured in left-profile relief. The crown on her head bears the word “Liberty,” and the 13 stars around her head represent the original American colonies. The reverse features the heraldic eagle in the middle, with “United States of America” and the face value engraved around it.

Coins in this listing are in Extremely Fine condition. Coins in this condition show very light wear on the highest points of the coin, with all of the major features still sharp and detailed.

The United States Mint used a total of seven of its eight available coining presses to produce Liberty Half Eagles. If you have questions about the Liberty Half Eagle, don’t hesitate to contact a Silver.com associate. You can direct your inquiries to one of our team members on the phone at 888-989-7223, online through our web chat, and via email. If you are interested in similar products, check out the Pre-1933 $5 Gold Liberty Half Eagles page of Silver.com. 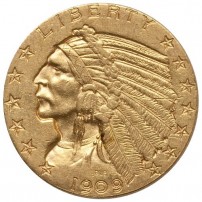