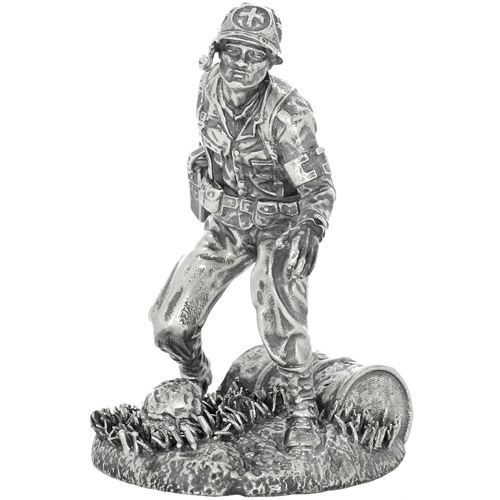 Medics on the field of battle are a relatively recent introduction in warfare. Ancient and Medieval armies simply fought until one side had no men left standing or retreated from the battle. There was little effort during the fight to patch soldiers up and get them back out there. The 17th century saw the occasional use of nurses or priests on the battlefield to assist the wounded, but the American Civil War would showcase the need for full-time battlefield medics in the US Army.

The 5 oz Silver Antique Silver Soldiers Collection Medic Martinez Statue available in this listing depicts the harrowing situation many medics find themselves in. Housed in a protective shipping box with an included Certificate of Authenticity, this stirring statue depicts a medic waiting for a break in the action to rush to the aid of his fellow soldiers.

Each 5 oz Silver Soldiers Collection Medic Martinez Statue features a soldier with the white cross sign indicative of medics on his helmet. Though his job includes taking lives, Medic Martinez has no weapon in hand. Instead, he’s scanning the battlefield looking for comrades in need of his assistance. It’s his job to locate the wounded, patch them up, and arrange for evacuation to a field hospital.

The advent of battlefield medicine first came about in the armies of Napoleon during the Napoleonic Wars in continental Europe during the 19th century. The brutality of the American Civil War showed the US Army the need for field hospitals, and later medics in the thick of the fight, to try and save lives as the mechanization of warfare pushed lethality to new heights.

Please don’t hesitate to reach out to Silver.com if you have questions about these silver statues. You can call us at 888-989-7223, chat with us live online, or email us directly.