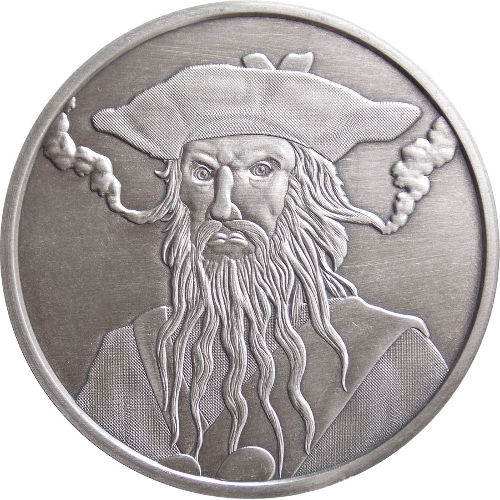 He went by many names, but when you saw the distinct flag of the Queen Anne’s Revenge you knew that Blackbeard was close by and that your ship was in peril. After arriving in 1708, Blackbeard would go on to strike terror in the heart of sailors across the Caribbean and even up the East Coast of North America. Today, the 5 oz Silver Antique Blackbeard Round is available from Silver.com.

There were few pirates as successful in terrorizing the Caribbean and the East Coast of North America as Blackbeard, but he was not the savage that many people would have imagined. Known as Edward Teach when he served with the British Royal Navy during Queen Anne’s War, the man who became known as Blackbeard was a savvy pirate.

Although Blackbeard had no qualms with attacking both commercial, privateer, and military ships, he very rarely killed or even threatened to kill those he took prisoner in battle. Blackbeard began his life of piracy with Benjamin Hornigold in 1716 from a base in Nassau, Bahamas, and took control of his own ship in 1717.

The 5 oz Silver Antique Blackbeard Round available today on Silver.com has stunning edge lettering that identifies each round’s place in the production process. The antique finish of each provides depth and warmth to the overall design for each round.

On the reverse of the round you’ll find the images from the flag of the Queen Anne’s Revenge. Blackbeard’s appearance was frightening enough, with a tall frame, broad shoulders, and a thick black beard that covered his face. The sight of his flag, a skeleton toasting the devil as it stabs a heart, was enough to make some ships conceded their cargo.

The obverse of the 5 oz Silver Antique Blackbeard Round includes a design that portrays Blackbeard as he was often seen in battle. Adding to his fearsome frame, Blackbeard would put fuses either under his hat or woven into his beard that he would light during battle.

Please feel free to reach out to Silver.com with any questions you might have about the 5 oz. Silver Antique Blackbeard Round. You can contact us on the phone at 888-989-7223, online using our live web chat, and via our email address.