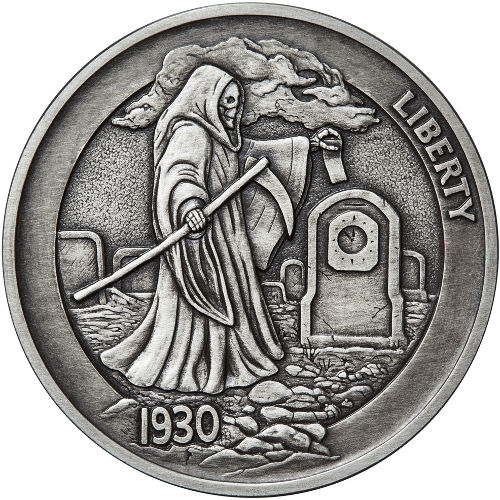 Silver rounds from the Hobo Nickel Series were a smashing success for HotCo in 2016, and now the series returns with five new designs for 2017. While last year’s release of the rounds feature similar design takes on the Buffalo Nickel, the rounds available this year all have a distinctly unique and different appearance on their obverse. Today, the 5 oz Antique Silver Graveyard Shift Round is available to you online at Silver.com.

All of the rounds in the Hobo Nickel Series for 2017 feature an antique finish. This is a proprietary polish from HotCo which provides added warmth in appearance and depth to the overall detail of the round.

There are many connotations of the graveyard shift in American lexicon in particular. While it is frequently used to refer to any working shift taking place between the late evening hours and early morning hours, it has a darker concept too.

The graveyard shift was often worked by an individual overnight in an actual cemetery, acting to both prevent grave robbing, but also take on the morbid task of ensuring anyone who was mistakenly buried alive would be heard or found while trying to fight out from the grave.

Each of these 5 oz Antique Silver Graveyard Shift Rounds arrives in protective plastic with a numbered Certificate of Authenticity. Designed by Chris DeFlorentis, these Graveyard Shift Silver Rounds are the seventh release of the Hobo Nickel series and just the second of the 2017 release schedule.

On the obverse of the 5 oz Antique Graveyard Shift Silver Round is the haunting image of Death as he strolls through the graveyard. His scythe is held tightly in his boney right hand, while his left hand extends a scroll featuring the names of the dead he seeks in the cemetery.

The reverse of each of these rounds includes a unique take on a fisherman out looking for a meal. Rather than casting a line in hopes of catching a meal, you’ll see a fish on shore casting out his line with a fisherman on the hook as a bait.

Please feel free to reach out to Silver.com with questions. Our customer service team is available to you on the phone at 888-989-7223, online using our live chat, and via our email address.