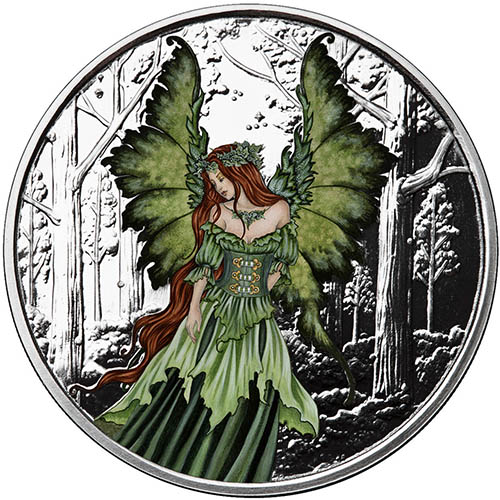 The Lady of the Forest is one of Amy Brown’s most impressive fairy designs. With a love of art since her childhood, Amy Brown has been producing and selling her fairy-realm paintings since 1997 when one of her works was quickly put on display in a small gallery she worked in and sold even quicker. The 5 oz Colorized Proof Silver Amy Brown Collection Lady of the Forest Round is available to you now online for purchase at Silver.com.

Amy Brown was hired on at a small gallery in 1997. When a frame on the wall opened up, she was asked to fill it with something. She placed one of her own fairy artworks in the frame, and it sold quickly. From there, her career followed an uphill trajectory that included selling works in local street fairs and galleries.

By 2000, her works were selling online and she was licensing her more than 2,000 designs for various outside uses. Recently, she was named among the Top 10 Fairy Artists in the World in 2017. Now, her designs feature in the Amy Brown Collection from the Anonymous Mint.

The obverse of these Colorized Proof Amy Brown Collection silver rounds you’ll find the image of the Lady of the Forest. Captured in the same beautiful colors of Brown’s original watercolor work, the Lady of the Forest has a tired, waist-cinched dress with long, flowing auburn hair and a wreath crown of leaves atop her head.

On the reverse of the 5 oz Colorized Proof Silver Amy Brown Collection Round is the image of Dusk. Created in 2003, Dusk watches over the twilight hours of the day as the sun sinks down beyond the horizon and the moon and stars begin to emerge on the scene. She sits perched on a high cliff with her bird-like wings ready to carry her into the skies over the fairy realm.

Anonymous Mint is a private coin creation company in the United States. Led by coin creator Julie Lindquist, Anonymous Mint works with Luigi Badia on many of its die casts to bring designs to life.

We encourage Silver.com customers to contact us with questions. You can call us at 888-989-7223, chat with us live online, or simply send us an email with your questions.