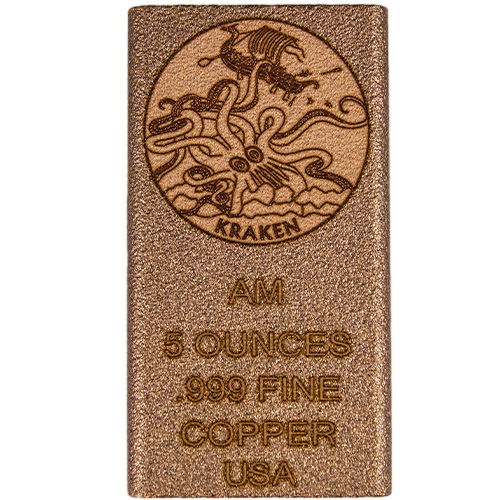 There was no creature more feared among ancient mariners than the Kraken. The beast rumored to be a massive cephalopod was first reported in the written records of Norse cultures and said to linger beneath the waves of the North Sea in the Atlantic Ocean. While the Kraken remains little more than a myth to this day, it is still the popular focal point of stories. Right now, 5 oz Copper Kraken Bars are available to you online at Silver.com.

Each of the 5 oz Copper Kraken Bars available here comes with plastic bags. These copper bars have flat surface areas with slightly rounded edges and boast a design element on just one side, with the other side left blank.

The people of Norse culture were some of the world’s greatest explorers. Between the 8th and 11th centuries CE, Norsemen descended from the lands now known as Sweden, Denmark, and Norway to explore the North Atlantic and the Mediterranean, trade as far away as the Middle East, and pillage both the British Isles and mainland Europe. Along the way, the Norse spread many tales of horrifying creatures from the depths of the oceans.

In the obverse design of the 5 oz Copper Kraken Bar, the mint features the image of the powerful beast as it attacks a Viking longship. The Kraken has emerged from the depths to attack the ship, lifting it clear from the water in the process and sending the sailors aboard the ship jumping overboard in hopes of surviving the attack. On the reverse of these 5 oz Copper Bars, there is a blank design field.

If you have any questions about copper bars, please feel free to ask. Silver.com customer service is available at 888-989-7223, online using our live chat, and via our email address.