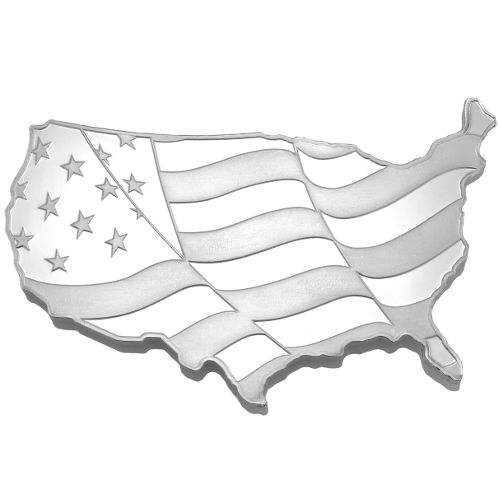 Any quantity available for $4.59 per oz over spot!

There are many symbols of American democracy and freedom, but none is more powerful and ever-present than the flag of the United States of America. Though it has evolved over time as the nation has expanded since 1776, the nation’s flag remains very similar to the original design of white stars on a field of blue, with alternating red and white stripes. The 5 oz Silver Elemetal US Flag Bar is available to purchase today on Silver.com.

Additionally, the field of blue in the upper-left corner included a circle of 13 stars that represented the new union of now-independent states. Over the course of US history, the stripes have remained the same as an indication of the nation’s founding colonies. However, the field of stars has grown to include one new star for each of the states in the US, growing to the current number of 50.

Each of these 5 oz Silver Elemetal US Flag Bars has a striking shape that resembles the United States of America’s geography. Rather than an outline of the states or the geography of the nation, the background on the obverse side features the American flag floating in the breeze.

Flip the bar over and you’ll find the repeating image of “Elemetal Mint” running through the background of the design, with the Elemetal Mint logo in the foreground. The mint’s name, weight, purity, and metal content of the bar is featured on this side of the bar as well.

Elemetal Mint is a newly-formed mint that is the result of collaboration between NTR Metals, Ohio Precious Metals, and Provident Metals. The companies launched the new brand in 2014, and it formally took shape in July 2015 when Ohio Precious Metals transformed its minting facility in southeastern Ohio to present Elemetal branded items to the market.

If you have any questions about the 5 oz Silver Elemetal US Flag bar, please don’t hesitate to ask Silver.com. Our customer service associates are available on the phone at 888-989-7223, online using our live web chat, and via our email address. To see similar products, visit our 5 oz Silver Bars page.