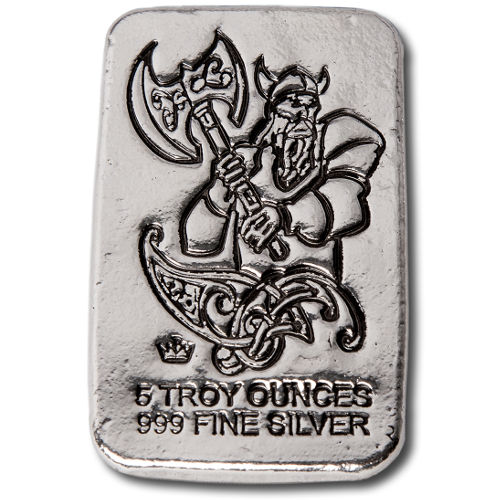 In a continuing shift in production approaches by Monarch Precious Metals, an all-new silver stacker bar has just been released by the private mint in the state of Oregon. Well-known to date for its popular hand-poured loaf bars, Monarch is releasing a new Viking-themed series of stackable silver bars starting in 2016. Today, the 5 oz Silver Monarch Precious Metals Battle Axe Viking Bar is available on Silver.com.

Monarch rose to prominence shortly following its opening in 2008, largely on the strength of its unique products. All Monarch Precious Metals silver bars and gold bars are hand-poured, and until recently, were generally produced as loaf bars. Investors typically prefer stackable bars with flat surfaces for easier storage.

As such, Monarch has released new silver bars with a stackable design, featuring two flat surfaces (compared to the rounded surface of loaf bars) and more distinct edges. The 5 oz Silver Monarch Viking Bar is the newest stackable product, and is the first in a planned series of Viking-themed designs.

On the obverse of the bar is the fearsome image of a Viking marauder wielding a double-headed axe. Viking is the term used to describe a Germanic Norse group that began expanding from Scandinavia between the 8th and 12th centuries. Often viewed only as conquering warriors, the Vikings also brought with them expanded trade routes that stretched from Scandinavia to the British Isles, Ireland, Northern and Central Europe, and even portions of Western Russia.

Monarch Precious Metals was founded in 2008 in Oregon’s Rogue Valley. All of its products are hand-poured and feature a minimum fineness of .999 for silver and .9999 for gold.

Please direct any questions you have to a Silver.com associate at 888-989-7223. You can also connect with us online using our live chat feature or send us an email any time.