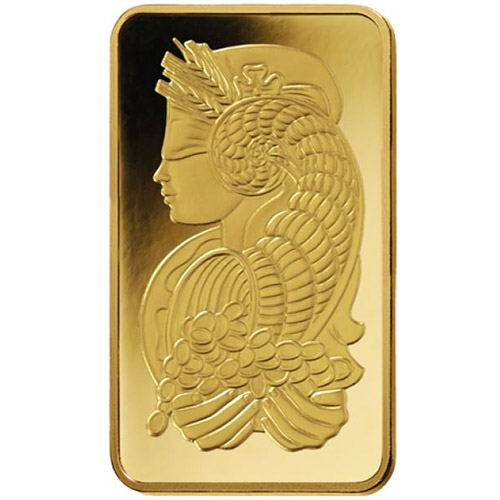 There are many symbols associated throughout history with the Roman goddess fortuna. The globe, wheel, and cornucopia are among them. Today, courtesy of PAMP Suisse, Fortuna herself has become a symbol of quality refining and precious metal purity from the leading bullion brand in the world. Today, 5 oz Gold PAMP Suisse Fortuna Bars are available to you online at Silver.com.

Among those symbols which are often associated with Fortuna, many pay homage to her role as the goddess of fortune and a personification of luck in the Roman religion. For example, the ball known as the Rota Fortunae translates from Latin as the “wheel of fortune.” The cornucopia she is often depicted wearing is known as a horn of plenty, and in many depictions is overflowing with riches.

PAMP Suisse is the world’s leading bullion brand, and its Fortuna bars are widely recognized instantaneously as a symbol of quality craftsmanship and impressive purity. The Fortuna design is used on bars of gold, silver, and platinum across weight ranges that go as low as 1 Gram and as high as 1 Kilogram in many cases. These 5 oz Gold PAMP Suisse Fortuna Bars represent one of the largest gold bar weights available.

The 5 oz Gold PAMP Suisse Fortuna Bars available in this listing are shipped inside of the refinery’s popular Veriscan packages. These tamper-evident security packages immediately alert you if there has been an attempt to open, and included within each is the assay card validating the weight, purity, metal content, and serial number of the bar.

On the reverse of all Gold Fortuna Bars you’ll notice the PAMP Suisse logo at the top consisting of four staggered circles, each with a letter from PAMP found within. Below that are engravings of the weight, metal content, purity, and assayer’s mark. The individual serial number is also featured in one-letter, six-digit format at the bottom.

The obverse of the 5 oz Gold PAMP Suisse Fortuna Bar features the simple depiction of Fortuna. She is found in left-profile format with a blindfold over her eyes and a bountiful cornucopia on her head that is pouring out coins into her cupped hands below.

All Fortuna bars are a product of PAMP Suisse. The refinery opened in 1977 in Ticino, Switzerland. Today it is part of the larger MKS Global group which operates from Geneva as a banking and refining company around the globe.

Feel free to reach out to Silver.com with your questions. We’re available at 888-989-7223, online through our live chat, and at our email address.