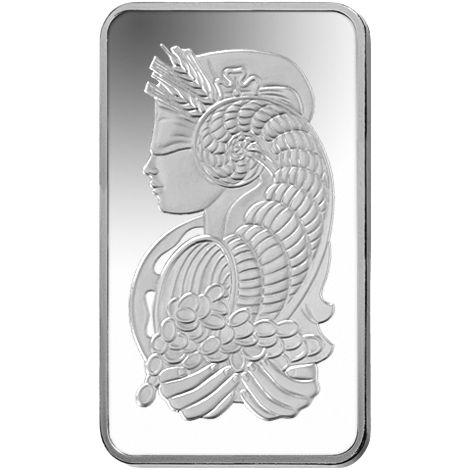 Roman mythology dominated society and human thought for hundreds of years before modern religions became established and accepted. Mythology arose out of the need for ancient societies to explain the activities and natural disasters they witnessed. The image of the Roman goddess Fortuna is featured on one of the most popular silver bullion products minted today. Now, you can purchase a brand new 5 oz PAMP Suisse Fortuna Silver Bar from Silver.com.

Fortuna was the Roman goddess of fortune. She was said to bring both bad luck and good to those who worshiped her, with no way of knowing which would be dispensed by the goddess. In Roman religion, she was viewed as the personification of luck. Her father was Jupiter; who is better known by the name of Zeus in Greek mythology. Jupiter is considered the king of the gods and king of sky and thunder. Fortuna is often depicted wearing a veil over her face or blindfold over her eyes, a depiction often used in modern visions of justice.

On the primary face of the 5 oz PAMP Suisse Fortuna Silver Bar is the image of Fortuna. In the image, she is blindfolded and wears a cornucopia atop her head. The horn of the cornucopia twists down her side to her cupped hands, where a vast amount of wealth spills forth into her palms. There are no other engravings on this side of the bar.

The opposite side of the Fortuna silver bar includes the identifying markers of the product. Engravings include the corporate logo for PAMP Suisse, the weight, metal content, purity, individual serial number of the bar, and the assayer’s mark. Around the rim of the bar, on both sides, is a slightly raised edge.

PAMP Suisse, known as Produits Artistiques Metaux Precieux, was established in Ticino, Switzerland in 1977. Operating a state-of-the-art facility, the refinery has established itself as the leading brand in the global precious metal marketplace. PAMP is a part of the MKS Group of Geneva, Switzerland. The greater MKS Group is one of the world’s largest precious metal and financial services firms.

If you have any questions about this Fortuna Silver Bar or other Silver.com products, don’t hesitate to contact our associates at 888-989-7223. Feel free to also use our live web chat to get in touch. Make sure you look over our full collection of PAMP Suisse Silver Bars for other sizes and designs from the mint.