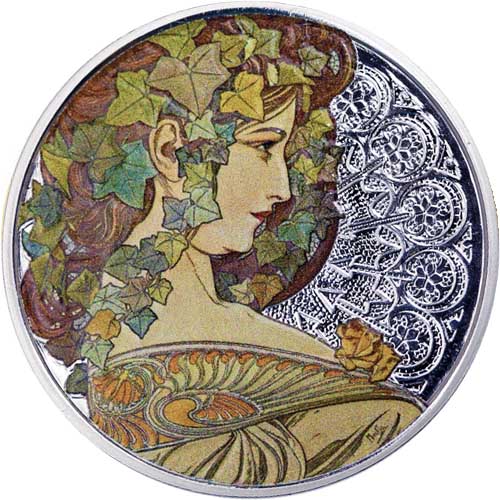 A new collection of silver rounds from Anonymous Mint celebrates some of the most culturally and historically significant works of Alphonse Mucha. The new series of silver rounds features two different weights available in each design release, with an antique, proof, and proof colorized version of each for a total of six rounds per design. Today, the 5 oz Proof Colorized Silver Mucha Collection Ivy Round is available to you online at Silver.com.

Alphonse Mucha made a name for himself in the artistic world first with the development of posters that came to be known as “Mucha Women” in a broader sense. Between 1895 and 1900 he released six different series of posters, each of which featured beautiful women on colorful posters with no text. Each woman was depicted in a manner that included suggestive gestures.

Other than his advertisements with beautiful women, Mucha was immensely active in contributing through various other art forms. Starting in 1895 he completed a variety of ad posters, paintings, and book illustrations that catapulted his career, but he was also involved in the design of postage stamps, banknotes, and even government documents for the newly independent Czechoslovakia following World War I.

Ivy and Laurel are two of the six designs planned for release in the Mucha Collection from Anonymous Mint. Both pieces of poster art were created by Alphonse Mucha in the early 20th century. The decorative image of Ivy was first created in 1901, and features ivy foliage that transforms the circular frame of the original artwork by Mucha into an oblong shape. The two pieces were eventually reproduced as decorative plates for sale.

The reverse of all Mucha Collection Silver Rounds includes a headshot portrait of Mucha taken from a real-life photograph of the Czech artist during the height of his works in the Art Nouveau period, from 1890 to 1910. Engravings include his name, year of birth and death, and the round’s weight, purity, and metal content.

Please don’t hesitate to contact Silver.com with questions. Our customer service team is available at 888-989-7223, online using our live chat, and via our email address. Don’t forget you can browse our full catalog of silver coins for sale online at any time!