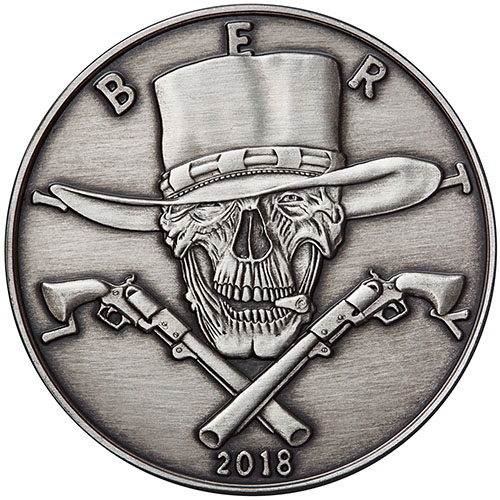 For the third release of the American Western Skulls Collection from the Osborne Mint, the Gunslinger design appears. The gunslinger was an individual with expert aim and a quick draw. These characters fell on both sides of the line between good and evil, with some serving the law while others tried to break the law. Right now, 5 oz Antique Silver American Western Skulls Gunslinger Rounds are available to purchase online at Silver.com.

Each 5 oz Antique Silver American Western Skulls Gunslinger Round available here today features an antique polish. The use of an antique polish on silver rounds gives the appearance of ancient coinage, with enhanced visuals on the more intricate features of the design elements.

The American Western Skulls Gunslinger Rounds are available in protective plastic capsules to ensure the quality and condition of the round. The edge-lettered serial number found on each of the rounds is also featured on the included Certificate of Authenticity.

America’s Wild West time period featured too many characters to count, but among the names you’re most likely to recognize is Jesse Woodson James, better known as Jesse James. The most famous member of the James-Younger Gang, he robbed banks, stage coaches, and trains. James was a folk hero during life, and legendary following his death.

The obverse of the Antique Silver American Western Skulls Gunslinger Round features a skeletal gunslinger figure. Like all rounds in the series, there is a common element of crossed weapons below. For the gunslinger, nothing is more appropriate than a pair of six-shooters. The word “Liberty” is also engraved above the figure.

On the reverse of the 5 oz Antique Silver American Western Skulls Gunslinger Rounds is the image of the fried eagle. Based upon the US heraldic eagle design, the heraldic shield is set in front of the fried eagle. This eagle has no feathers, but still holds the arrows and olive branch with a cluster of 13 stars above its head to represent the original colonies.

Osborne Mint is the oldest operating private mint in the United States. Osborne traces its roots back to the 1830s when Andrew Jackson was President of the United States of America, and the nation had no singular accepted currency for commercial transactions.

If you have any questions, please feel free to ask. Silver.com customer service is available at 888-989-7223, online using our live chat service, and via our email address.