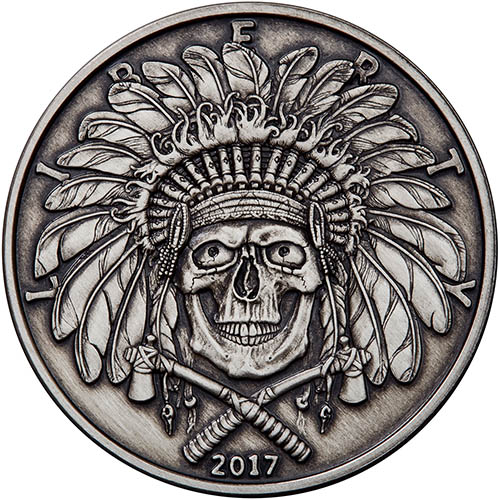 When most people think of vintage, items from the American West come to mind. This time period in American history ended in 1912 with the addition of Arizona and New Mexico to the Union as states. Now there are countless products, television series, and movies that bring the romanticism of the Wild West to life. Today, 5 oz Vintage Silver American Western Skulls Indian Chief Rounds are available to you online at Silver.com.

The period of time known as the Old West or Wild West refers to the American frontier days. As the colonial regions along the East Coast began to fill up and people looked for new land, people moved west. This expansion first occurred as Europeans and Americans crossed the Appalachian Mountains to settle lands between the range and the Mississippi River.

The true American West period encompassed the time when Americans crossed the Mississippi River to settle the vast territories west of the Rocky Mountains. In this period, European and American settlers clashed with Native American tribes over land, while lawmen struggled to control the lawless lands that outlaws sought to take advantage of at the same time.

On the obverse of the Vintage American Western Skulls Indian Chief Round is the image of a Native chieftain. This undead figure stares at you from the surface of the round wearing a full headdress, with a pair of tomahawks crossed below, and engravings of “Liberty” and “2017.”

The reverse of the 5 oz Vintage American Western Skulls Indian Chief Round features the heraldic eagle of the United States. In this design, the national shield, arrows of war, and olive branch of peace feature along with the constellation of 13 stars arranged in a triangle. However, fitting in style with the round program’s theme, this bird is dead and has no feathers on its body.

These vintage rounds have an antique polish finish. This helps to create a sense of antique coinage in the appeal and enhances the intricate details of the design elements. Please direct your questions about this silver round to Silver.com associates at 888-989-7223. You can also connect with us online through our live chat and email address.