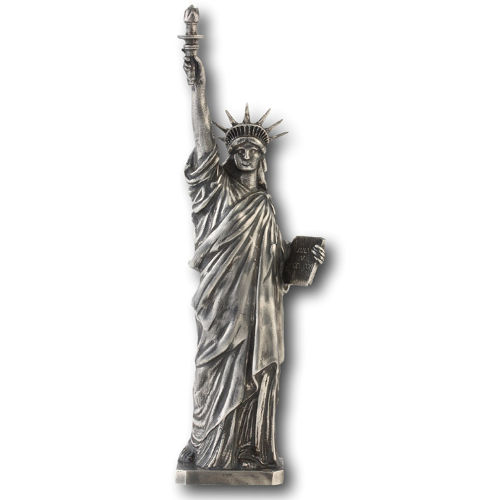 Only one woman has stood present to watch some of the most momentous occasions in American history. She has greeted millions arriving on these shores in search of a better future; watched the nation celebrate the end of World War II, and looked on in horror on the worst day in the nation’s history on 9/11. Now, Lady Liberty can stand watch in your home with the 5 oz Silver Antique Finish Lady Liberty Statue, available on Silver.com.

The Statue of Liberty is a uniquely American icon that has stood in the waters of New York Harbor since 1886. However, the origins of the Statue of Liberty are rooted in a friendship that started more than 100 years prior to her arrival in the United States.

During the American Revolution, the only outside nation to support the rebel American cause was the French. Long rivals of the British, the French eventually provided the American Continental Army with guns and naval support that the fledgling nation needed to defeat the powerful British Empire.

The Statue of Liberty was created by sculptor Frederic Auguste Bartholdi and delivered to the United States in various stages. The statue was meant as a gift to signify the long and enduring friendship between the United States of America and France, one that would be called upon during both World War I and World War II.

Each of the 5 oz Silver Antique Finish Lady Liberty Statues in this listing beautifully replicates the appearance of the Statue of Liberty in a four-inch tall sculpture that features .925 fine silver content. The antique finish is proprietary to Heads or Tales Coin Company, and provides subtle depth of design and warmth.

The Statue of Liberty’s design is based upon the Roman goddess Libertas, a robed female figure. Her torch is held aloft as a light to the rest of the world, and the tabula ansata (tablet evoking law) has an inscription with the American Declaration of Independence’s date on it, July, 4, 1776, as well as broken chains at her feet.

If you have questions, Silver.com associates are happy to help. Please don’t hesitate to reach out to us at 888-989-7223, chat with us live online, or send us an email. Find similar products on our Silver Statues page.