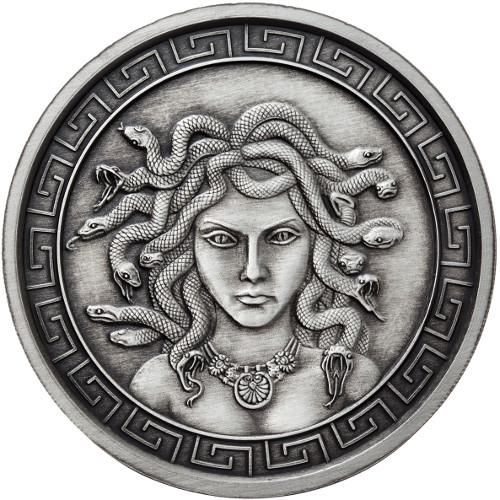 There’s an old saying that goes “that stare strikes fear in the heart of man.” Well, Medusa’s stare may not have struck fear in the heart of men, but it was certainly powerful enough to stop them in their tracks and encapsulate them in stone for eternity. The power and fear of Medusa are captured on a new series of silver rounds from Anonymous Mint. The 5 oz Silver Antique Medusa Round is available as a brand-new product now on Silver.com.

Many of Greek antiquity’s greatest heroes, villains, gods, and goddesses are interwoven into the story of Medusa. First there is the creature herself and the goddess Athena. Medusa was originally a beautiful woman who served as a priestess in her temple. After an affair with Poseidon, which violated her oath of celibacy, Athena cursed Medusa.

She was transformed into a hideous beast with a head of snakes for hair and the ability to turn any man whose eyes met hers into stone, dooming her to a life of solitude. Perseus, the demigod son of Zeus, was the only man to enter her presence and live, having cut off her head to survive. When he killed her, the winged horse Pegasus and the golden-sword wielding giant Chrysaor sprang from her a body, a result of her pregnant status courtesy of Poseidon.

Perseus went on to give the head of Medusa to Athena for use on her shield, and now you can own the less-intimidating stare of Medusa on the brilliant 5 oz Silver Antique Medusa Round from Anonymous Mint. The antique finish of these rounds gives them the brilliant appearance of age, without suffering centuries of exposure to circulation.

On the obverse of all Silver Medusa Rounds you’ll find the portrait of Medusa, complete with a penetrating stare and her head full of snakes. Surrounding her image is a classic Greek key pattern.

The reverse of each 5 oz Silver Antique Medusa Round has the Anonymous Mint logo, which includes an owl with its wings spread wide as it clutches a cluster of arrows. There are 13 stars included in the design above its head, as well as a crown with the initials “AM” visible.

The Anonymous Mint is a private minting facility located in the United States, and Coin Creator Julie Lindquist assisted in the development of these edge-lettered, individually serialized silver rounds.

If you have any questions, please don’t hesitate to contact Silver.com. Our associates are available at 888-989-7223, online using our live web chat, or via our email address.