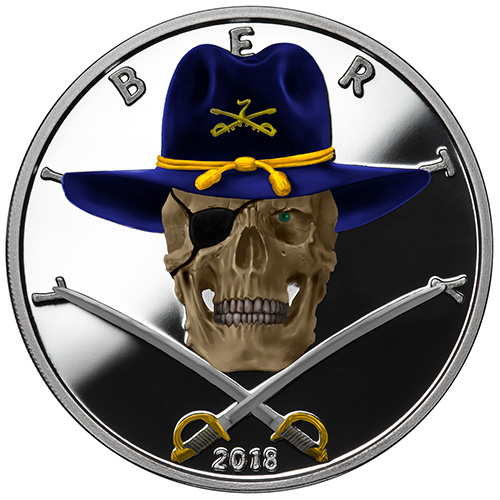 The American Western Skulls Collection from the Osborne Mint features a total of six designs with impressive balance in the characters represented from the Wild West. There are two designs each of law enforcement, outlaws, and indigenous tribal members. The fourth design and second law enforcement figure is the US Cavalryman. Today, 5 oz Colorized Proof Silver American Western Skulls Cavalryman Rounds are available to you online at Silver.com.

US Cavalry forces originated in the Revolutionary War as fast, mobile forces capable of countering the King’s Dragoons of the British Army. Known as the Continental Dragoons, these soldiers on horseback were America’s first cavalry. The golden age of American cavalry on horseback came during the period following the Civil War that coincided with western expansion.

All of the 5 oz Colorized Proof Silver American Western Skills Cavalryman Rounds are available to you with protective capsules. The silver rounds you purchase come with a numbered Certificate of Authenticity that matches the number found on the edge of each round. These colorized silver rounds have beautiful hues that bring a new vision to each design in the American Western Skulls Collection.

On the obverse side of all 5 oz Colorized American Western Skulls Cavalryman Rounds is the depiction of a dead US Cavalry soldier. This individual gave his vision for his country and wears an eyepatch over his right eye. He proudly wears the blue cap of a US Cavalry soldier which includes the golden ribbon around the base and the crossed swords insignia of America’s cavalry during the 19th century.

US Cavalry forces filled various roles during the period of expansion into the Wild West. The cavalry’s primary job was to act as a fast-response force to aggression by indigenous tribes. Cavalry forces were used to guard supplies moving between the East Coast and federal outposts in the west, as well as messengers for mail and added units for local law enforcement when necessary.

The reverse side of 5 oz Colorized Proof Silver American Western Skulls Cavalryman Rounds features the fried eagle. This depiction of the heraldic eagle of the United States has all of the same qualities as the original design, except this bird is dead as you can see from its complete lack of feathers.

Please don’t hesitate to contact Silver.com with questions. You can contact us at 888-989-7223, chat with us live online, or simply send us an email with your inquiries.