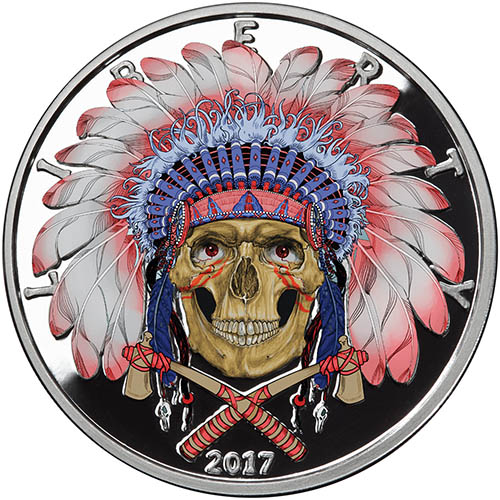 The debut issue of the American Western Skulls silver for sale is the Indian Chief design. The only round in the collection offered in 2017, this design is the first of six in the overall series and just one of two to feature the image of an indigenous tribal member. The 5 oz Colorized Proof Silver American Western Skulls Indian Chief Round is available to you online today for purchase at Silver.com.

The figure depicted in this Indian Chief design from the American Western Skulls Collection is a revered leader and elder of his tribe. The Indian Chief wasn’t always the most powerful warrior of an indigenous tribe, but rather he was respected for his age and wisdom. A tribal chieftain was often instantly recognizable by the full headdress worn upon his head.

In the American Western Skulls Collection from Osborne Mint, six popular characters that defined the struggle in the American Wild West appear on silver rounds for sale. The Indian Chief led the way in the 2017 debut of the series, with five rounds to follow in 2018 which featured the Sheriff, Gunslinger, Indian Brave, US Cavalryman, and concluded with the Mexican Bandito.

Each of the rounds in the American Western Skulls Collection comes with a 1 oz and 5 oz option. The 1 oz rounds initially featured proof, antique and colorized options against the proof and antique options in the 5 oz weight. These 5 oz rounds now offer collectors of the larger format to get colorized proofs as well.

On the obverse of the 5 oz Colorized Proof Silver American Western Skulls Indian Chief design is the image of a chieftain’s skull wearing a full headdress. The feathers of the headdress have bright hues of white, red, and blue, and his war paint is also visible on his cheeks in more muted tones. The crossed tomahawks at the bottom have wrappings of red.

The reverse side of all American Western Skulls Collection Rounds has the same design. The fried eagle is a deadly twist on the US heraldic eagle, with a fried bird devoid of feathers replacing the typical American bald eagle.

These 5 oz Colorized Proof Silver American Western Skulls Indian Chief Rounds come with a protective capsule and Certificate of the Authenticity. The numbers on the COA match those of the unique serial number engraved on the edges of the rounds.

We encourage Silver.com customers to contact us with questions at 888-989-7223. You can also connect with us live online using our chat service or send us an email with your questions.