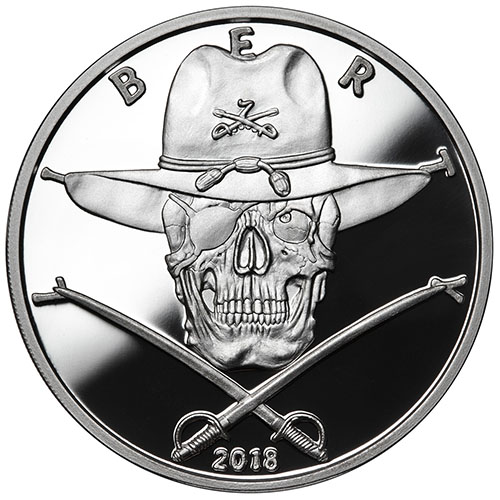 The United States Cavalry was a branch of the United States Army that played a pivotal role in extending the governance of the United States into the states now included in the Western United States. With vast expanses of terrain to cover, the cavalry was entrusted to move swiftly and act decisively. The 5 oz Proof silver American Western Skulls Cavalryman Round brings another character from the Wild West to life in this collection and is available now online at Silver.com.

The cavalry of the US Army were horse-mounted units that were born during the Revolutionary War. Modeling the United States Dragoons on the British Dragoons of the British Army, these units were able to move with increased speed compared to columns of troops and cover greater distances with efficiency than longer trains of foot soldiers.

As the United States expanded westward, it was the US Cavalry at the forefront of this movement. Cavalry units were the primary regiments employed in guarding US Army outposts and combating indigenous tribes in their clashes with both settlers and the United States Military protecting those settlers.

On the obverse of the 5 oz Proof Silver American Western Skulls Cavalryman Round is the design of a Cavalryman’s skull. This skeletal figure wears a traditional brimmed cavalry cap. The cap has the crossed-swords insignia of the US Cavalry and this particular individual clearly lost an eye in battle at some point as he wears an eyepatch over his right eye. Engravings on this side include “Liberty” along the top and “2018” at the bottom.

The reverse of the Proof Silver American Western Skulls Cavalryman Round features the fried eagle. Similar to the heraldic eagle of the United States, this design includes the triangular constellation of 13 stars above the eagle, the national shield on the bird’s chest, and the arrows of war and the olive branch of peace in its talons. The difference in this design is the use of a featherless bird.

Your 5 oz Proof Silver American Western Skulls Cavalryman Round features a protective plastic capsule and Certificate of Authenticity with purchase. The round has an edge-lettered serial number that matches the number on the COA.

We encourage Silver.com customers to call us with questions when buying silver. You can reach us at 888-989-7223, connect with us online using our live chat, or simply send us an email.