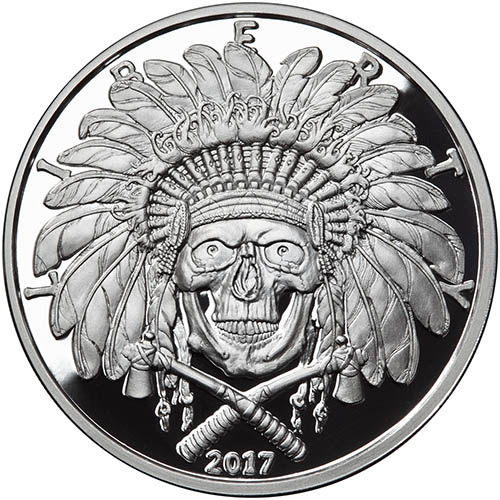 If you’re a fan of the Old West, there’s a new series of silver rounds for sale online that you must consider adding to your collection. The American Western Skulls Indian Chief is the debut issue in a planned six-round series that features skeletal figures representing Old West characters such as sheriffs, outlaws, and Native Americans. Right now, 5 oz Proof Silver American Western Skulls Indian Chief Round is available to purchase online at Silver.com.

Each 5 oz Proof Silver American Western Skulls Indian Chief Round ships to you within a protective plastic package. The rounds in this offering are proof silver products that have a frosted finish to the design sets with a mirrored background field. This finish creates impressive contrast between the design aspects and the background field of the rounds.

The American West is often romanticized in the modern era of America. Hollywood has turned this era into one in the American psyche that makes outlaws, lawmen, and lawlessness an attractive combination at the box office. The American Western Skulls Collection from Osborne Mint capitalizes on the allure of the Old West.

On the obverse of all 5 oz Proof Silver American Western Skulls Indian Chief Rounds you’ll find the glaring image of an Indian Chief skull. This skeletal figure has no flesh, no nose, and few other facial features. The eyes set in the sockets glare at the viewer with intensity. Aspects of the design include a full headdress of feathers with crossed tomahawks below.

The reverse of the American Western Skulls Indian Chief Rounds have the shared design that will feature on the reverse of all rounds in the collection. This distinct take on the American heraldic eagle features a skeletal bird behind the national heraldic shield. There are 13 stars above the bird, which holds the arrows of war and the olive branch of peace in its talons.

All American Western Skulls Collection silver rounds are produced by the Osborne Mint for the series. Founded in 1835, Osborne Mint traces its roots to a time period in which Andrew Jackson was president and there was no federally issued banknote in the United States.

If you have any questions for Silver.com, please feel free to reach out to us. You can call us at 888-989-7223, chat with us live online, or email us directly.