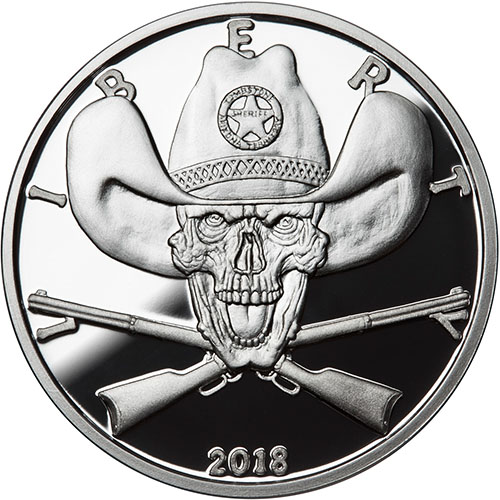 When there was a job that needed to be done in the Wild West to keep the peace, citizens from one state to the next territory relied upon their sheriffs to get it done. The Old Sheriff design is the second issue in Osborne Mint’s American Western Skulls Collection of silver rounds. Available in two weights and three versions for each design, there’s great variety in this collector’s issue. The 5 oz Proof Silver American Western Skulls Old Sheriff Round is available to you today for purchase online at Silver.com.

Sheriffs in the Wild West were a Jack-of-all-Trades type. Elected by county residents as the top lawman in a given county, the primary duty of a sheriff was to keep the peace and pursue criminals throughout his county. A sheriff had the duty to arrest, serve warrants, and even form posse’s to hunt down criminals. In a pinch, sheriffs could also serve as county tax collectors.

The 5 oz Proof Silver American Western Skulls Old Sheriff Round is one of the two largest offerings in this collection. Each design is available in 1 oz silver and 5 oz silver. While the 1 oz rounds have proof, antique, and colorized options with higher mintage figures, the 5 oz rounds are limited to just 500 in mintage, and come in proof and antique only.

On the reverse of the American Western Skulls Rounds is the image of the heraldic eagle of the United States. Similar to American coinage, you’ll find the engraving of “United States of America,” with the weight, purity, and metal content included. The heraldic shield is there, along with the arrows and olive branch of peace. Rather than a lively bald eagle though, this bird is a skeletal figure known as the “fried eagle.”

The obverse of the 5 oz Proof Silver American Western Skulls Old Sheriff Round features the skull of the local sheriff, complete with his hat and badge issued by Tombstone, Arizona Territory. Engravings include “Liberty” above and “2018” below, with a pair of repeating rifles crossing below the chin of the sheriff.

For the proof issues in the American Western Skulls Collection, you’ll find mirrored background fields, which contrast nicely with the finish of the design elements. The combined finishes help offset the design from the background as you look at the design.

We encourage all Silver.com customers to call with questions at 888-989-7223. You can also reach out to us online through our live chat and email address.