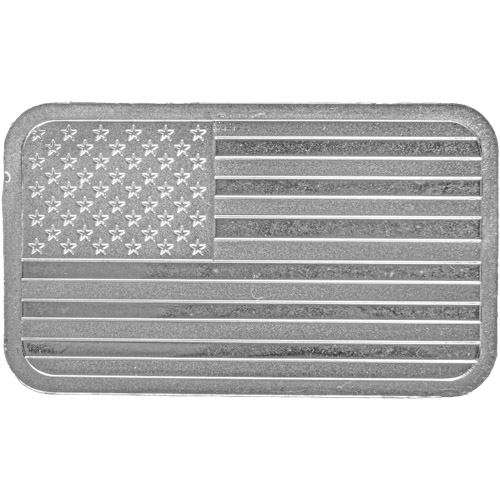 One of the most popular product lineups from SilverTowne is the American Flag Bar Series. These silver bars for sale are already available in two popular weights from the mint, 1 oz silver and 10 oz silver. Now, SilverTowne offers a third version for silver buyers. The new 5 oz silver bar replicates the same designs found on the other weights in this design series. Today, 5 oz Silver SilverTowne American Flag Bars are available to you online at Silver.com.

All of these 5 oz Silver SilverTowne American Flag Bars are available to you for purchase with individual, sealed plastic for each bar and in boxes of 100 bars. The bars come with alternating polished and mirrored finishes to the stripes to create visual contrast between each of the 13 stripes on the obverse field of the bars.

On the obverse side of SilverTowne American Flag Bars is a depiction of the modern American flag. Designed in 1958 by Robert G. Heft and adopted by a presidential proclamation in 1959, the formal adoption of this design by Congress came a year later. This version of the flag includes thirteen stripes in the primary field representing the original colonies that broke from the United Kingdom to form the United States. Also found on this side is the canton in the upper-left with 50 stars, one for each modern state in the Union.

The reverse field of 5 oz Silver SilverTowne American Flag Bars comes with the identifying hallmarks of the bar. These details are inscribed in the central design field, while the background has a cross-hatched finish.

Please feel free to reach out to Silver.com with any questions about these silver bars. You can call us on the phone at 888-989-7223, chat with us live online, or simply send us an email with your inquiries.