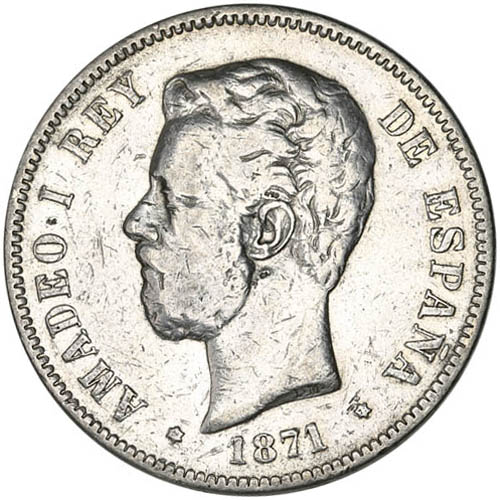 From 1869 until 2002, the peseta was the currency of Spain and a de facto national currency for Andorra, which had no currency of its own. The peseta was issued as gold and silver coins as well as paper banknotes of the course of more than a decade in circulation prior to the adoption of the Euro within the nations of the European Union.

All 5 Pesetas Silver Spanish Coins in this product listing come from a small production era ranging from the introduction in 1869 to its end in 1899. Although pesetas continued in silver in various other denominations after 1899, the 5 Pesetas denomination was not issued for wide circulation again after that date.

The obverse of the 5 Pesetas Silver Coins from 1869 and 1870 include the image of a female in a reclined position. It is said she’s the female personification of the nation and her figure is surrounded by “Espana” above and the date of issue below. Following the establishment of a new monarchy in 1870, the effigy of King Amadeo I of Spain was used from 1871 until his abdication in 1873.

King Amadeo I’s effigy is captured in left-profile relief with the date of issue engraved below, and his image surrounded on the sides by “Amadeo I Rey de Espana.” This engraving translates to “Amadeo I King of Spain.” Amadeo I’s abdication resulted in the short-lived First Republic of Spain with no 5 Pesetas coins issued in 1874.

The reverse of all 5 Pesetas Silver Coins from Spain includes the nation’s coat of arms. The coat of arms of Spain includes a complex shield with five sections representing the various royal houses of Spanish regions, a crown above, and the pillars of Hercules on either side.

Please direct your questions to Silver.com customer service at 888-989-7223. You can also connect with us using our live chat and email address.