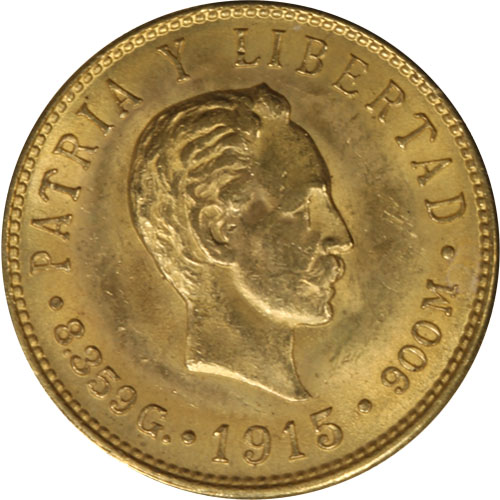 The Gold Pesos from Cuba were a series of coin denominations issued over a two-year span in the early 20th century. In the early years of World War I, as gold was sinking in demand in Europe as a result of the conflict, the Cuban government turned to the United States for assistance in coining and releasing five new gold denominations. Now, 5 Peso Gold Cuba Coins are available to you for purchase online at Silver.com.

The Cuban peso was first issued as a banknote by the Spanish Empire specifically for use in Cuba. The denomination of the peso was set at an exchange rate of 1 Peso to 8 reales, the Spanish currency of the day. Starting in 1869, decimal notes in the Peso were issued with values against the centavo, with 100 centavos to each peso.

The obverse field of 5 Peso Gold Coins features a right-profile bust of Jose Marti, the essayist, poet, and journalist who led the call for independence from Spain until his death in 1895. The portrait of Marti is surrounded by inscriptions of the weight, date, and metal content, with the motto “Patria Y Libertad.”

On the reverse side of the 5 Peso Gold Coins is the Cuban coat of arms. The national coat of arms was adopted in 1906 and remains the only currently-used socialist nation coat of arms not to use any sort of communist symbolism.

These 5 Peso Gold Cuba Coins are available from random years in varied conditions. We will ship these coins inside of protective plastic flips. The coins come in conditions that can vary from BU, AU, and those with light wear and tear to those coins with moderate-to-heavy wear and tear from circulation.

Silver.com cannot guarantee a particular coin and condition in advance. All coins are chosen after your payment clears. Please note that you may get coins with the same designs and conditions when you buy more than one.

Silver.com customer service is available to assist you at 888-989-7223. Our team is also available to you online through our live chat and email address features.