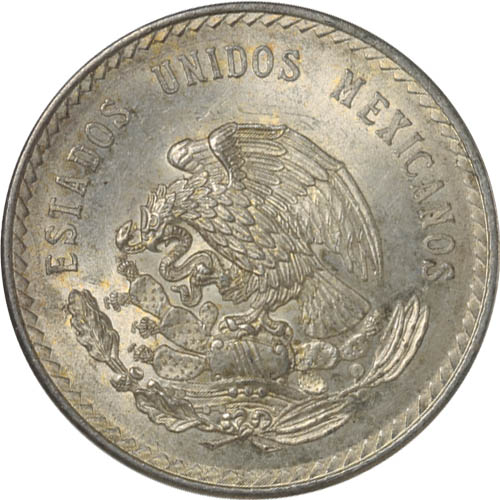 In the early 20th century, it was common for nations around the world to issue circulation coins using silver. In the United States, silver coins were in production until 1964. To the south, Mexico also issued silver coins into circulation. In 1947 and 1948, the Mexican Mint issued a coin with an effigy of Cuauhtemoc on the reverse field of the coins. Today, 5 Pesos Silver Mexican Cuauhtemoc Coins are available to you online at Silver.com.

The Mexican Cuauhtemoc coins were only issued by the Mexican Mint for two years. In 1947, the series debuted with 5.11 million coins produced. The next year, in what turned out to be the final year of production, the mint released 26.74 million coins. These circulation pieces featured 90% silver content and 10% copper for durability in circulation.

All of these 5 Pesos Silver Mexican Cuauhtemoc Coins are available to you in XF or AU condition. The coins here are either Extremely Fine or About Uncirculated. An AU coin is in the better condition of the two with only extremely light wear and tear on the highest points and the potential for full mint luster to remain. An XF coin has light wear and tear on its highest points with only traces of the mint luster possible.

Silver.com selects coins to fulfill your order at random after your payment has cleared. As a result, we are not able to guarantee the date mark and specific condition of the coin you receive. Please keep in mind that you can receive coins with the same date marks and conditions when buying multiples.

On the obverse of 5 Pesos Mexican Cuauhtemoc Coins is the national coat of arms. The national coat of arms is based on the Codex Mendoza image of an eagle devouring a serpent. The Ancient Aztecs were told by their gods to look for this event and found the city of Tenochtitlan upon the site where the eagle was eating a snake. That remains the national seal today, with a golden eagle devouring a snake on a cactus branch in the design.

The reverse face of 5 Pesos Silver Mexican Cuauhtemoc Coins bears a depiction of Cuauhtemoc. The final ruler of the Aztec Empire, Cuauhtemoc came to power as the Spanish were conquering the empire. He was unable to turn the tide against an enemy with superior weapons and diseases not seen in the New World that had ravaged the native populations.

Please feel free to reach out to Silver.com if you have any questions. Our team is available at 888-989-7223, online using our live chat, and via our email address.