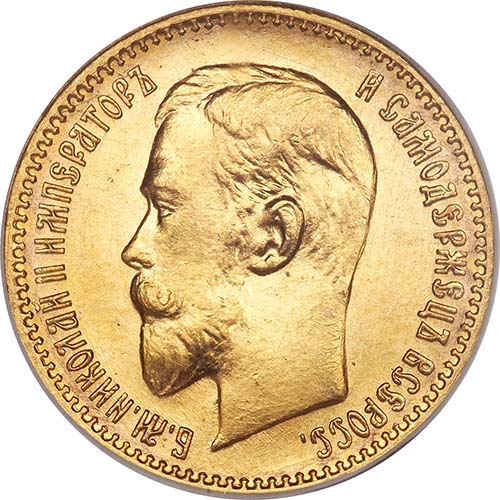 The Russian Empire was once among the largest empires in the world, surpassed in size only by the British Empire and the Mongol Empire. One of the most famous gold coins issued by the Russian Empire during its nearly 200-year existence was the gold rouble, also spelled ruble like the modern Russian currency. Right now, 5 Rouble Gold Coins are available to purchase online at Silver.com.

Each of the 5 Rouble Gold Coins available for purchase here today comes from the era of the Russian Empire. Gold coins were struck for the empire primarily by the Imperial Mint at St. Petersburg and featured a face value in the imperial denomination of roubles. Today, the Russian Federation continues the use of this currency, but spells it as rubles and does not issue a gold coin.

The 5 Rouble Gold Coin was most commonly issued during the latter stages of the Russian Empire’s existence. Tsar Nicholas II was reigning as the Emperor of Russia during the time these gold coins were issued, with his rule extending from November 1894 until March 1917 when he abdicated in the face of the communist revolution. These gold coins were issued from 1897, the year following his official coronation, until 1911 as World War I dawned on the horizon.

On the obverse of the 5 Rouble Gold Coin is a portrait of Nicholas II. He is featured here in left-profile relief in a clean portrait with just his image and the name of the nation of issue. Nicholas II was the last ruler of the House of Hanover and his rule coincided with the economic collapse of the empire, numerous military defeats, and the end of the monarchy following the Russian Revolution of 1917.

If you have any questions about the 5 Rouble Gold Coin, don’t hesitate to contact Silver.com. Our customer service team is available to you on the phone at 888-989-7223, online using our live chat, and via email.