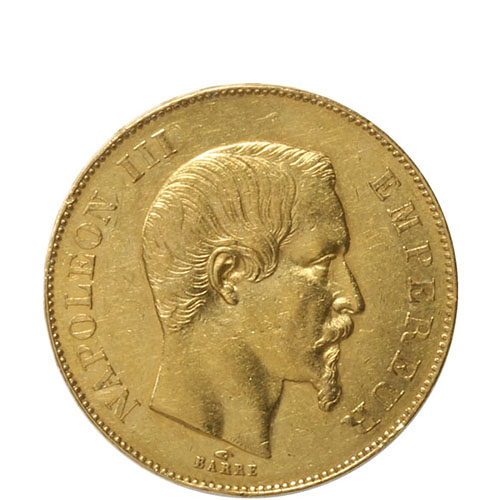 One of the leading European currencies of the 19th century was the Franc. Introduced in France during the reign of Napoleon Bonaparte, the popular 10, 20, and 50 Francs coins remained popular denominations throughout portions of Western Europe up until the eve of World War I. 50 Francs coins were produced in France and French-annexed portions of Italy, Belgium, and the Netherlands. Now, Gold 50 Francs Coins are available to you for purchase online at Silver.com.

The Franc was a denomination first issued in France during the 14th century. By the 19th century, the 20 Franc coin, in particular, had become the basis of what was known as the Latin Monetary Union. The weight and metal content of the Gold Franc made it the ideal baseline for a gold coin standard that would become widely accepted throughout Western Europe until the start of World War I.

Although it was not the most common face value in the series, Gold 50 Francs Coins were issued by France and served as the basis for the Swiss Franc, Italian Lira, Spanish Peseta, and even the Greek Drachma. In portions of Belgium, Italy, and the Netherlands annexed by Napoleon, France issued the Gold Francs using their own portraits and legends on the coins.

On the obverse of Gold 50 Francs Coins, you’ll often find the portrait of a national leader or important national symbol. For example, Swiss Francs of the 19th century often bore the image of Helvetia, the female personification of Switzerland. French Francs always featured the portrait of the ruling leader, such as the Gold Francs of the Second Republic and Second Empire during Napoleon III’s rule.

The reverse side of Gold 50 Francs Coins includes a design often based on the national coat of arms of official seal of the issuing country. Again, Swiss Francs would use the cross from the national flag along with the face value of the coin above that national symbol.

These Gold 50 Francs Coins are available as a random year and random country offering. Each one is in Very Good+ condition, meaning you’ll notice worn designs with above-average detail still visible for a coin in this condition. Silver.com cannot guarantee the date mark and nation of issue on the coin you receive. If you purchase multiples, be aware you may receive several coins from the same year and nation of issue.

We encourage Silver.com customers to call us with questions about gold for sale at 888-989-7223. You can also connect to us online through our live chat and email address features.