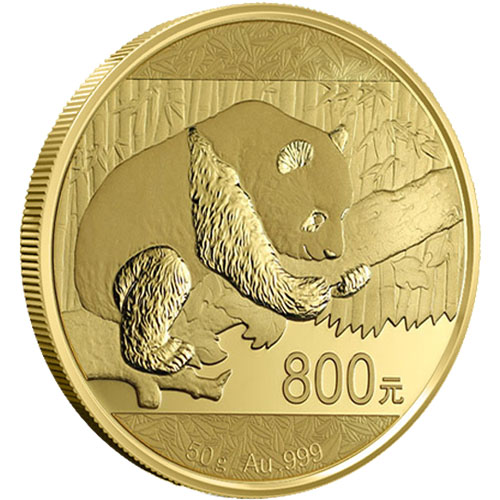 The Gold Chinese Pandas are among the best-selling gold coins in the world. Introduced in 1982, the series has become a staple among investors buying gold each year. In addition to the quality of the coins and the government-backed purity of each issue, the coins also bear a new design of the Giant Panda each year for added value. Now, 50 Gram Proof Gold Chinese Pandas from random years are available to you for purchase online at Silver.com.

Giant Pandas are a species of bear that is referred to as “Giant Pandas” to separate them from the Red Panda species, an animal closer in nature to a raccoon than the bear species. Giant Pandas have patches of black-and-white fur and, despite their size, subsist largely on a diet of bamboo.

For the obverse design of 50 Gram Proof Gold Chinese Pandas, you will find the Hall of Prayer for Abundant Harvests. This building has featured on the obverse of the coins since the 1982 debut of the series and is accompanied by inscriptions of the nation of issue and date mark along the outer design fields.

In the reverse design element, 50 Gram Proof Gold Pandas have a depiction of the Giant Panda species. The design on the reverse changes each year and can depict one or two pandas. Many, though not all, of the coins issued in this series have images of a wall of bamboo in the background fields.

These 50 Gram Proof Gold Chinese Pandas are available to you with beautiful wooden display boxes and come with a Chinese Mint Certificate of Authenticity. Each coin has contrasting frosted designs and mirrored fields.

Silver.com offers these coins as a random year listing. We select your coins for you once your payment has been processed. We do not guarantee any date marks or designs, and if you purchase multiples, it is possible you will receive several coins that all have the same designs and dates.

Silver.com customer service is available at 888-989-7223 to field your questions. You can also chat with us live online or email us directly.