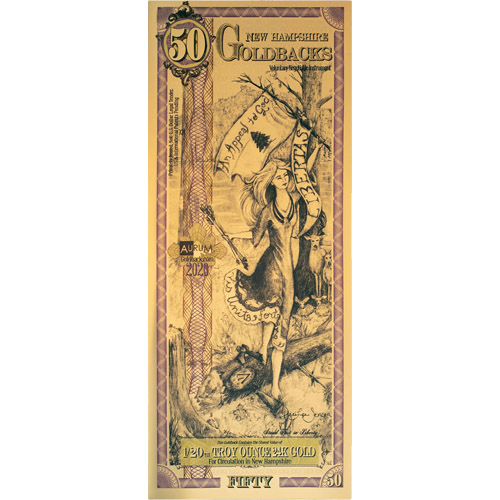 Goldback Gold Notes represent a revolution in gold bullion. The design and creation of gold notes is unique enough, but within the Goldback Series, the pieces take on greater significance than just being the thinnest forms of gold bullion available. Issued for specific states, Goldbacks represent a spendable form of gold bullion as a voluntary local currency. Now, 50 New Hampshire Goldback Gold Notes are available to you for purchase online at Silver.com.

The 13 former British colonies in North America embraced the spirit of Providence, Fortitude, and Liberty in taking on the world’s greatest military power in the late-18th century in search of freedom and liberty. New Hampshire, today one of the smallest states in the United States, took the first monumental steps forward in the American Revolution.

It was New Hampshire that was first to thumb its nose at Great Britain by establishing its own independent government separate from the control of Great Britain. It was also the first to establish a state constitution. New Hampshire was also the site of one of the earliest actions of the Revolution. The raid on Fort William and Mary in December 1774 netted the Americans the guns, powder, and cannons necessary to launch the revolution just months later in 1775.

Libertas, the Roman goddess that embodied Liberty, features on the obverse of 50 New Hampshire Goldback Gold Notes. In this young effigy of Liberty, she is shown walking along with a flag held high in her left hand. This flag has the inscription “An Appeal to God” with a lone pine tree beneath it.

Officially known as the Pine Tree Flag, this flag was one of the earliest flags carried by American forces during the Revolutionary War. The flag was popularized by the earliest cruisers of the Continental Navy. Six cruisers flew the flag under the authority and commission of George Washington. Ships of the Massachusetts state navy and privateers from the same state also flew the flag.

For the reverse of 50 New Hampshire Goldback Gold Notes, you will find only a mirror image of the design from the obverse. The thin nature of gold notes makes it difficult to produce separate designs on the obverse and reverse as the imagery of one side is reflected on the other.

50 New Hampshire Goldback Gold Notes are in brand-new condition in this listing. Each one is individually housed inside of a protective plastic currency sleeve.

Silver.com customer service is available to assist you with inquiries at 888-989-7223. You can also direct your questions about buying gold to our team through our live chat and email address features.